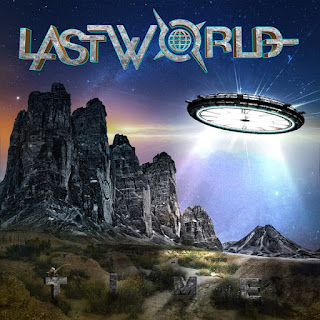 LASTWORLD is a band that consists of multi-instrumentalist/songwriter JIM SHEPARD and vocalist DAVID CAGLE. JIM SHEPARD is an American independent multi-instrumentalist who has recorded several solo albums as well as his band Taxi, who dominated the Northwest Indiana rock scene in the 90s. Award-winning international singer DAVID CAGLE has recorded vocals on more than 1000 songs over the past 10 years for clients all over the world, covering multiple genres of music.
Their new opus entitled "Time" is going to be released through Perris Records this October (29th) and it's about a damn well-crafted slice of pure and very old-fashioned melodic rock sample that the sure thing is that will put a wide smile upon your face.
The new album includes some really amazing tunes that the fans of the clasic AOR/Melodic Rock scene will adore. The melodies are really huge, the guitars are crunchy enough to boost the final result higher and the choruses are out of this world.
So, from the 13 tracks that are in "Time" there's no filler in sight; not a bad moment or something boring!! Really, this album is simply great from start to finish. From the opening tune of "Time" to the melodic perfection of "Four Leaf Clover"  or the Tyketto-esque tune of "Fallen" and the groovy "Alive", this record is delightful!
If you love bands such as ALIAS, THE STORM or Tyketto then look no further; LASTWORLD with their brand new "Time" are here to offer to you a fantastic slice of classic melodic rock/AOR record that can't be missed by any fan of this genre.
Songwritting : 8
Production : 8
Songs : 9
Musicianship : 8
Overall Rating : 8,25 / 10
www.facebook.com/LastWorldMusic/