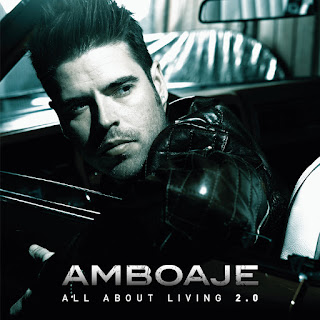 Toni Amboaje is the lead vocalist of the Spanish band Hard Spirit. The band was formed back in 2002 and released the album entitled "Walk The Wild" in 2007.
That same year Amboaje participated in an AOR project from Jaén Hardleywood's band, where he co-wrote and sang in three songs. In late 2007, he accepted Ardines, Mon and Ramil's invitation to join them as lead vocalist for alternative metal band Sauze, where he participated on debut album Nada Tiene Sentido, released on June 1, 2008.
Back in 2015, Toni released, through Melodic Rock Records, his debut solo opus entitled "All About Living". The album achieved to gain very positive feedback from both fans and music press. Nowadays, Toni signed with Danish label Lions Pride Music for a re-release of that album with a slightly different cover artwork and, also, two brand new songs,  one of them covering the popular single of Alice Merton's 'No Roots'!
In "All About Living 2.0", you are going to hear some really excellent music. Some killer songs that all of them are featuring powerful performances, in-your-face vocals, edgy guitars and a catchiness enough to make you turn on the volume!! Moving between early Kane Roberts, Daughtry and Bryan Adams "All About Living 2.0" is a great surprise and it is an opus that will make your day.
It's really unessecery to review each and every single track seperate here 'cause as I already mentioned above the whole album took me by surprise of how solid and good is!! The melodies are superb, the vocals by Toni are passionate and powerful and the hooks and choruses will make you whistle them for days!!
Even though we are getting to close this year, the good releases comin' one after another. "All About Living 2.0" is one of those releases that must be added to your collection asap!! Really amazing!!
Songwritting : 8
Production : \8
Songs : 9
Musicianship : 9
Overall Rating : 8,5 / 10
https://www.facebook.com/ToniAmboajeRock