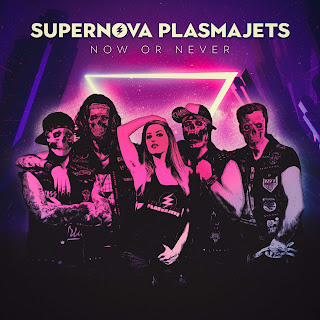 Supernova Plasmajets is a band that since its creation, in 2013, it has released two solid records that both gained positive feedback from music press and fans around the world. With its modern but, also, classic 80's melodic hard rock music, Supernova Plasmajets is a band that knows right how to 'speak' straight through the heart of every rock fan out there.
Nowadays, Supernova Plasmajets is ready to unleash its brand new opus entitled "Now Or Never" through Pride & Joy Music. The new record is settled for release in October 22th.
After the small intro of "Pretty Bizzare", it comes the first big highlight of the new album; "Beggin'"!!! It's one of those tracks that 'smell' late 80's from miles away. The melody, the big harmonies, the short but intense riffs and, of course, the soulful vocals of Jennifer Crush are all harmonized perfectly!! Killer tune! "Now Or Never" is the second song that made me turn up the volume! Yes, this yet another amazing song that once again features a big harmonic line, a huge chorus line and this so sweet late 80's vibe. The edgier "Deer In The Headlights", the up-beat and heavier "Fade Away" and the modern "Break Me Down" are all three strong samples of modern and at the same time classic hard rock stuff with big attitude!! The cover of the classic 80's hit of "Tell It To My heart" is just killer!!!!
Bottom line is that Supernova Plasmajets with their brand new "Now Or Never" opus are aiming for big things!! Some really killer songs, powerful performances, up-beat rhythms and this late 80's vibe are the igredients of this extremely interesting record!
Songwritting : 8
Musicianship : 9
Songs : 8
Production : 8
Overall Rating : 8,25 / 10