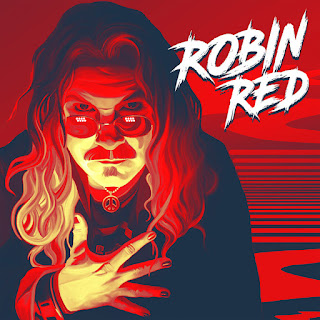 Robin Red is the shouter of Sweden's amazing modern hard rock band of DEGREED. "Robin Red" is the brand new debut solo record for Robin Red. ”I’ve been thinking about doing a solo album for many years. It’s kind of a dream come true. But I never really felt ready, not until now. I'm gonna go back to the roots and make it a little more organic. I'm very inspired by artists like Jimmy Barnes and Bryan Adams, and the sound will not be far from there, I think. But it will still be me,” says Robin about his debut.
The album is going to be released through Frontiers Music this September (17th). The album is a great mix of traditional melodic rock sound and bands such as Foreigner, The Giant, Bryan Adams and Bad English. "Robin Red" was recorded together with Dave Dalone (H.E.A.T), as producer, guitarist and co-songwriter.
The new record kicks-off with the excellent up-tempo "Don't Leave Me (With A Broken Heart)" and continues with the absolute breathtaking and groovier tune of "(I'm A) Bad Habit" which is, in my humble opinion, one of the best tracks of "Robin Red". The rocking "Freedom", the ultra commercial "Midnight Rain" and the acoustic "Reason To Survive" are all three solid samples full of emotions, up-beat rhythms, great performances and above all Robin's soulful voice!! With "Nitelife", Robin offers yet another killer uplifting song while with "Head Over Heels" and the 'punchier' "Living Dead", we have two more impressive songs out form this debut.
A real classy melodic rock album that can't be missed by any fan of the rock scene in general. A more classic melodic rock opus regarding the modern heavy rock stuff with Degreed but overall an impressive debut by Mr. Robin Red. Highly recommended!!!
Songwritting : 8
Production : 9
Songs : 8
Musicianship : 9
Overall Rating : 8,5 / 10
https://www.facebook.com/robinredericsson
https://www.instagram.com/robinredofficial/