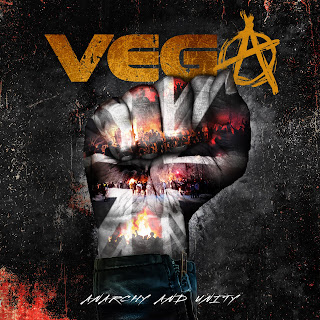 One of my favourite 'new' hard rock bands, VEGA, are back in business with their brand new record entitled "Anarchy And Unity". The new album is going to be released through Frontiers Music this September (17th).
"Anarchy And Unity" is the band's seventh, already, full-length opus and as in their previous the same here VEGA continues to deliver ass-kickin', up-tempo and melodic stuff and the sure thing is that it will please every rock fan in general.
"Anarchy and Unity" sees two new faces on board, Billy Taylor (ex-Inglorious) on guitars and Pete Newdeck (Nitrate, Midnite City) on drums. They join singer Nick Workman, guitarist Marcus Thurston, and the brothers Martin, keyboardist James and bassist Tom.
The first couple of songs, "Beautiful Lie" and "Sooner Or Later", are exactly what I wanted to hear from these guys; powerful, up-beat and in-your-face modern hard rock at its highest order!! In "End Of The Fade" the band is delivering a 'classic' VEGA song while in "Ain't Who I Am" we have yet another killer song!!! It features some excellent melodies, catchy hooks and an explosive chorus line to turn on a maximum volume. "Welcome To Wherever", "Bring The Riot" and "Glow" are all three excellent samples out of the new record. All three are up-beat, hard edged, riff-tastic and in-your-face tracks just for your ear pleasure!
Bottom line is that VEGA is a band that will always deliver high-quality, fistful and up-beat hard rock music 'ballsy' and with attitude!! It seems that with the two new guys on board VEGA took a big boost and that is reflected to this brand new album. "Anarchy And Unity" is a hell of an album and it's easily a high recommended for every serious hard rock freak out there.
Songwriiting :8
Production : 9
Songs : 8
Musicianship :9
Overall Rating :  8,5 / 10