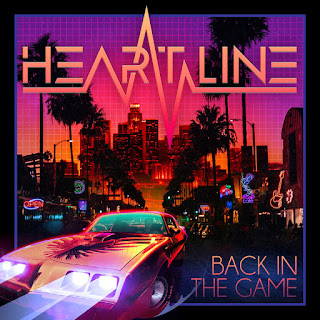 HEART LINE is the brand new AOR/Melodic Rock project by French guitarist and producer Yvan Guillevic (YGAS, PYG, United Guitars).
Together with vocalist Emmanuel Creis (Shadyon, Equinox), keyboardist Jorris Guilbaud (Devoid, Shadyon), drummer Walter Français (Shadyon) and bassist Dominique Braud (YGAS, EBH) HEART LINE created a really solid and very old-fashioned melodic rock album with the title "Back In The Game". The new opus is seattled for release this November through Pride And Joy Music.
Heart Line is a band that unveils the glorious sound of the mid 80's, early 90's, with passionate vocals, 'tasteful' guitars, big hooks and choruses and some really killer tracks.
The two openers, "Fighting To Live" & "One Night In Paradise", are both a great samples of what's to follow here. Both tunes include big hooks, clever choruses, big guitars and, of course, this sweet 80's vibe in it. The edgier "Hold On", the up-beat "I'm In Heaven" and "Back In The Game" are all breathtaking. All the above mentioned songs could easily appear back in the 80's and all of them could be major hits in MTV!!! The straight-forward "Stranger In The Night" and "I Long To Rise" are both solid.
This is a great, up-tempo and very old-fashioned record that each and every fan of bands such as Bad English, The Storm, Unruly Child and The Giant should check it out! Remember the name of Heart Line in the near future....I'm sure that big things will follow up the next years....
Songwritting : 8
Production : 8
Songs : 9
Musicianship : 9
Overall Rating : 8,5 / 10
Facebook: https://www.facebook.com/Heartlinebandofficial