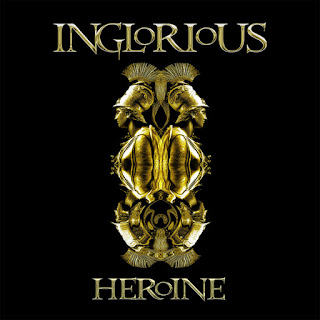 Brit hard rockers INGLORIOUS are back, again, with this new and very entertaining record entitled "Heroine". And to be more specific here, when I say again I mean that "Heroine" is their second album this year. "We Will Ride", the band's forth official full-length, released on February and till' now achieved to gain a great feedback from both fans and music press.
"Heroine" is an album that includes covers only! It's a tribute to the various outstanding female musicians who have influenced the band either musically and/or vocally. From, already, the first spin of "Heroine" I have to say that I'm really impressed here; INGLORIOUS achieved not only to 'catch' the spirit of the originals but, also, to put their own harder identity to each of the song and the final result is really breathtaking.
Some of the songs that appear here are classics such as Queen Of The Night (Whitney Houston), Barracuda (Heart), Bring Me To Life (Evanescence), I'm With You (Avril Lavigne),  I Hate Myself For Loving You (Joan Jett ) and Time After Time (Cyndi Lauper ).
The big star here is without any doubt Mr. Nathan James. His smooth, powerful and soulful vocals are top notch and sings his heart out in every single track!! Of course the solid rhythm section along with the killer guitar duo of Danny De La Cruz and Dan Stevens are the cherry on top!
All in all, "Heroine" is a top class and high entertaining record that must be played on maximum volume!!! Inglorious treated those classic songs with so much respect, they put their own 'pinches', heart and soul and the result is magical!
Musicianship : 10
Production : 9
Songs : 10 +++(for the collection of the songs here....)
http://inglorious.com/
https://www.facebook.com/weareinglorious
https://www.instagram.com/weareinglorious/
https://twitter.com/weareinglorious