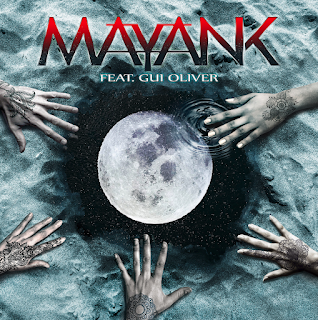 Mayank is a new melodic rock band that consists of Brazilian vocalist Gui Oliver, the Swedish guitarist Rolf Nordström (Perfect Plan), the keyboardist/producer Alessandro Del Vecchio, and the drummer Nicholas Papapicco.
The name of Gui Oliver is certainly no stranger to the melodic rock/AOR freaks. In 2010, the melodic fans got a first taste of his amazing vocals through AURAS' debut album "New Generation". Unfortunately, the group disbanded after releasing their debut and playing a few shows in their home country, Brazil (including support gigs for Jeff Scott Soto and Jimi Jamison).
Gui, however later on, joined Landfall, another new Brazilian melodic hard rock act, who soon found their way to sign with Frontiers Music. Landfall released their solid debut album, "The Turning Point" via Frontiers in 2020.
The album kicks-off with the very Journey-esque tune of "Destiny Calling". The soulful and passionate vocals of Gui rockets this track up in the sky while the melodic lines are really impressive. "Billy's On The Run", "We Are One" and "Long Live The Souless" are all three some great samples of pure, classic and very old-fashioned way melodic rock gems. All three include a crunchy guitar work (thanks to the very talented Rolf Nordström ), amazing performances and, of course, some clever and catchy hooks and choruses. The classic and pure AOR stuff continue with "Julia's Smile", the beautiful mid-tempo "Sign Of Love", "Hold On" and "Road To Paradise".
All in all, MAYANK with its debut achieve to deliver a fantastic and very old-fashioned melodic rock/AOR gem that every fan of this genre will adore!
Songwritting : 8
Production : 8
Songs : 9
Musicianship : 9
Overall Rating : 8,5 / 10