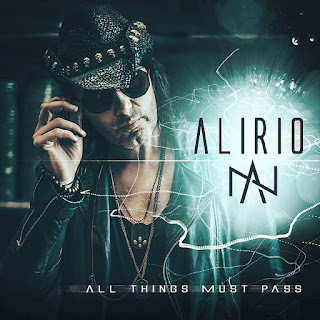 ALIRIO is a Brazilian musician and actor and in his country considered as one of the most recognized rock voices. Whether he's on stage, in the studio, or performing in musical theatre, Alirio always makes a strong impression with his powerful voice. His Frontiers Music Srl debut, “All Things Must Pass” is out August 6, 2021.
"All Things Must Pass" is an impressive record all the way. The music variety here covers every rock style and at the end leaves you with a sweet taste in your ears. The musicians on the album include drummer Adriano Daga (a Grammy award winning producer as well) and bassist Felipe Andreoli (Angra). We also have Journey vocalist Arnel Pineda who appears for a duet on the album.
"I am thrilled and truly heartfelt in being a part of the Frontiers family,” says Alirio. And continue by saying : "This album is very special to me, not only for featuring really close friends who are well known worldwide, but specially for the passion and truth I put into every single note of this album. I have to say that this might be the most honest work of my career. Having a record label of this magnitude believe in my music in such a rough moment for the whole world is a huge blessing."
The highlights here are plenty but if I had to pick up some, I would say that the kick-ass opener "All Things Must Pass", the more melodic "Let It All Burn", the 'darker' "The First Time", the U2-esque "Edinbourgh", the heavy groovin' "Back To The Light" and the fantastic and very emotional tune of "Grey" are my personal favorites.
All in all, this is an extremely enjoyable and interesting release all the way. ALIRIO with his debut "All Things Must Pass" achieves to offer a solid and impressive rock album that, in my humble opinion, is a must have for every rock fan in general.
Songwritting : 9
Production : 8
Songs : 9
Musicianship : 8
Overall Rating : 8,5 / 10
Website: https://www.alirionetto.com Instagram: https://instagram.com/alirio_nettoYouTube: https://www.youtube.com/c/AlírioNetto