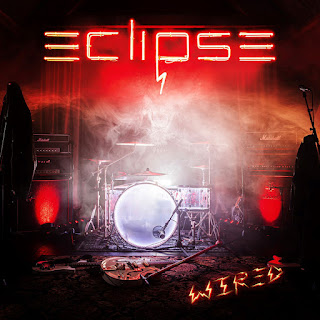 Finally, ECLIPSE are ready to unleash their brand new opus entitled "Wired", through Frontiers Music. After their solid "Paradigm" record, with the massive single "Viva La Victoria" which has over 15 million views (... and still counting) these amazing Swedes are back in business with "Wired".
Over the last few years, Eclipse have performed to audiences around the globe and all their albums have amazed millions of streams and charted in several European countries. The CD and MC edition of the album features a bonus track, "Dead Inside", while in the LP edition we are going to find another bonus song entitled "Ain't No Fun".
"Roses On Your Grave", the opener, is just killer! Up-tempo, heavy and with a truly breathtaking chorus line enough to make you scream for more!! One of the best tracks that this band has ever released without exageration!!
"Dying Breed" is yet another amazing tune. A classic up-beat Eclipse song with a catchy as hell hook line, razor guitars and a tight as hell rhythm section.
"Saturday Night (Hallelujah)" was the first taste that we all took from this new album. A huge rock 'n ' roll anthem that must be played on a maximum volume!
"Run For Cover" sounds like a leftover from the "Paradigm" album. A more 'darker' hard rock gem in which Erik Martensson's vocals really shines here.
"Carved In Stone" is the first slow track out of "Wired". An acoustic and very emotional song, which is gettin' harder in the middle,  includes a sweet melody, great arrengements and an overall great vibe in it!
"Twilight" will make you turn on the volume up again! A punchy hard rocker with a metallic edge song that will put a big smile upon your face.
"Poison Inside My Heart" reminds me a bit of the collaboration between Erik and Ronnie Atkins (Pretty Maids) in Nordic Union. A really nice song.
"Bite The Bullet" is 100% Eclipse!!! Powerful, anthemic and bombastic!
"We Didn't Come To Lose" is heavier, groovier and includes a killer guitar solo. Another very interesting track out of the new album.
"Things We Love" features a 'clever' melody, a more commercial sound and I, also, like the AOR-ish 'pinches' here and there.
"Dead Inside", the bonus track, is the song that closes this really fantastic record. A straight forward melodic heavy rock gem that takes no prisoners!! The chorus line is pure heaven and, in general, this is one of the album's highlights!!
ECLIPSE are back in business with one of their best records to-date!! I really love the heavier direction that they took in "Wired". It's bombastic, it's heavy, it includes tones of melodies and tons of catchiness for your ear pleasure and at the end leaves you hungry for more!!! The musicianship is top notch as always, Erik's voice sounds more powerful than ever and the guitars of Magnus Henriksson are out of this world!!! PERFECT!!!!
Songwritting : 10
Production : 10
Songs : 10
Musicianship : 10
Overall Rating : 10 / 10
https://www.facebook.com/EclipseSweden/
http://instagram.com/eclipse_sweden