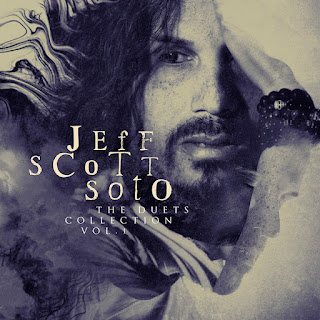 Using the down time from his normally relentless touring activity, due to the worldwide pandemic, renowned vocalist Jeff Scott Soto decided to create a very special album which pays tribute to some of the classic songs he has recorded over his amazing career.
The fact here is that Soto not only re-recorded these classics but he, also, 'called' some of his best friends in music business to create an amazing duets opus. With the likes of Erik Martensson (Eclipse, W.E.T.), Dino Jelusick (Animal Drive, Dirty Shirley), Eric Martin (Mr. Big), Johnny Gioeli (Hardline), Deen Castronovo (Revolution Saints), Nathan James (Inglorious), Russell Allen (Symphony X), Renan Zonta (Electric Mob), Mats Leven (Candlemass, TSO), BJ (Spektra, SOTO), and Aliro Netto, Jeff Scott Soto gave to these gems a fresh and updated vibe that the sure things is that every fan of Soto's music will adore.
Apart from this so impressive list of guests in "The Duets Collection-Volume I" we find also Jorge Salan, Howie Simon (guitars), Leo Mancini (guitars), Tony Dickinson (bass) and Edu Cominato (drums).
The collection of the songs in this record covers a wide range of Jeff's career. From his glory days with TALISMAN to MALMSTEEN, EYES and also from his solo recordings. The songs that appear here are all classics such as "I'll Be Waiting" (Alirio Netto), "Don't Let It End" (Dino Jelusick), "Holding On" (BJ from SPEKTRA, SOTO), "Mysterious" (Erik Martin) and many more for your ear pleasure.
As I already mentioned above, the tracks that appear here are all gems and are all songs that stood the test of time. Jeff Scott Soto with "The Duets Collection -Volume I" gave an extra boost and a fresh approach  to these originalls and, at the end, they created a unique opus that the sure thing is that it will be appreciated by any rock fan in general. Well done!!
Musicianship : 10
Songs : 10
Production : 10
Overall Rating : 10 / 10
https://www.facebook.com/JeffScottSoto/
https://sotoworld.net/