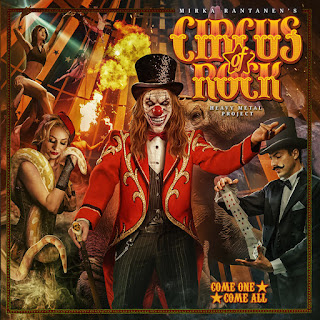 For damn sure, this is yet another high recommendation release that's comes to your door this August from Frontiers Music!! CIRCUS OF ROCK is a rather super massive project masterminded by drummer Mirka Rantanen (King Company). Their debut album, “Come One, Come All” will be released on August 6, 2021.
Mirka Rantanen has a long career in the Finnish hard rock scene. He has played on 30+ albums during his 30-year long career, including releases by King Company, Raskasta Joulua, Kotipelto, Warmen, Northern Kings, Revolution Renaissance, and more. In addition, ten years ago he created the very popular heavy rock band for kids called ‘Hevisaurus’, for which he was awarded the Emma Award in 2011 (the Finnish equivalent of a Grammy).
With the participation of musicians such as Johnny Gioeli (Hardline), Pasi Rantanen (Thunderstone), Elize Ryd (Amaranthe), Marco Hietala, Riku Turunen and Danny Vaughn (Tyketto), to name a few, CIRCUS OF ROCK' debut opus will leave you breathless.
“A few years ago I started to think about recording a solo album; however, I didn’t want to do just a traditional solo album. That’s because people often think a solo album is mainly to allow the musicians to show off their fantastic skills and magnificent instruments, but I wanted to focus more on the great songs that don’t happen to have extra drum solos. I also wanted to include many fantastic colleagues with whom I have played over the years on this album, and in addition a couple of great guest singers. My intention is to get the album released in 2021, when I turn 50. And now this will happen thanks to the Frontiers label. The album will be a kind of milestone in my professional career, my long-term 'dream what is finally coming true' type of thing," says Rantanen.
The first highlight comes with the Hardline-esque tune of "Desperate Cry" (Feat. Johnny Gioeli). A classic hard rock song with Giolei's superb performances in front row. Next, in "Sheriff Of Ghost Town" (Feat. Marco Hietala) we have yet another winner out of this debut. Another superb piece of up-tempo heavy rock anthem with a monster chorus line! The hard-bluesier tune of "Crossroads" (Feat. Pasi Rantanen) is solid while in "Caught In The Middle" Danny Vaughn is delivering a great track in a very old-fashioned Tyketto way! Other highlights out of this debut are the amazing and very melodic "Edge Of Love" that features Rick Altzi on lead vocals, "Everafter" and the 80's pop-rock tune of "Tears Of The Clown".
All in all, CIRCUS OF ROCK is a rock 'n' roll circus that invites each and every melodic hard rock/AOR fan to join in!! Highly recommended stuff!
Songwritting : 8
Production : 8
Songs : 8
Musicianship : 9
Overall Rating : 8,25 / 10