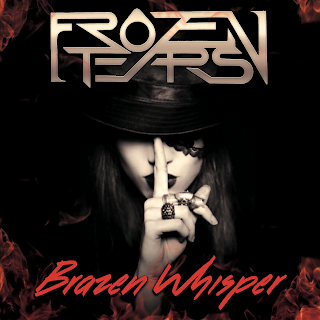 Frozen Tears is a band that was 'born' in Melbourne, Australia, back in 1996. Originally formed by vocalist Thanis Akritidis and guitarist Jon Powers, Frozen Tears released its full length debut “Silence Of The Night” in 1997.
The debut featured fifteen songs and gained excellent reviews in an industry before “social media” was a thing! Silence of the Night amply demonstrated the strong creative chemistry between Akritidis and Powers, not to mention the duo’s songwriting skills and the overall musical chops of the group. The album was well-received both critically and by the band’s fans, and also found an audience overseas, particularly in Europe where it still sells consistently thanks to the enduring popularity of that musical style on the continent.
The stars finally started to align for the band in early 2020, when Frozen Tears began laying down fresh ideas and new tracks for a new release.
For the new release, Frozen Tears enlisted popular session drummer Glenn Wellman from the UK who has played with the likes of Jordan Rudess from Dream Theatre and Adam Holzman (Miles Davis) to name a few to lay the drum tracks for the new release “Brazen Whisper”. Frozen Tears also enlisted Ty Sims to engineer and co-produce the new album. Ty Sims has worked with AOR giants HOUSE OF LORDS on their last albums as well as TANGO DOWN & BOMBAY BLACK.
So, what about the music? The answer is simple; Frozen Tears sounds very late 80's and recalls to bands such as Whitesnake, House Of Lords, Dokken and the likes of these classic bands of that glory era. The opening tune of "Brazen Whisper" is simply breathtaking! Up-beat, powerful and melodic as it gets! For sure, the best apettizer of what's to follow up next. "You" is a more commercial tune and brings memories of bands such as Valentine and The Giant. Excellent, just excellent stuff! "Hold On Tight" is good while in "Love Can Be Real" we have yet another amazing and powerful melodic rock gem that features some 'tasteful' guitar lines. In "Set Me Free" the band is delivering a more groovy and kinda 'funkier' hard rock song that I totally love! "Can't Stop" is an overall solid power ballad song that includes a more relaxing vibe and some beautiful harmonic lines. The new album closes with the pretty cool cover track of KISS classic "C'mon And Love Me".
If you are a freak, just like me, of bands such as Bon Jovi, KISS, Whitesnake, FM and Dokken, to name a few, then, look no further; FROZEN TEARS with their brand new "Brazen Whisper" opus will blow you away!! Fantastic stuff!!
Songwritting : 9
Production : 8
Songs : 10
Musicianship : 10
Overall rating : 9,25 / 10