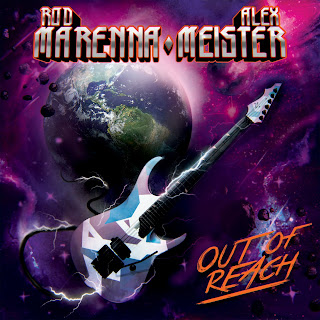 Marenna-Meister is the new very prommising project that consists of Rod Marenna (lead vocals) and Alex Meister (guitars - Pleasure Maker, solo artist). The new opus is entitled "Out Of Reach" and it is released inder the label of Lions Pride Music.
Both of the musicians are influenced by the melodic rock/hard rock scene of the mid 80's, early 90's, and that's a thing that reflects to their music in a great way. The big riffs are here, the loud and catchy choruses are here, the melodies are also here and in general the whole album 'smells' 80's from miles away.
The first couple of tracks, "Out Of Touch" and "The Price Of Love", are a damn fine example of the above mentioned things. Both tracks bring back memories from bands such as Baton Rouge, Dokken, Bon Jovi and Danger Danger. The rhytmic "Gimme All You've Got", "Many Things", the AOR-ish hymn of "It Ain't So Easy (Loving You)" and the Hair Metal-esque "Ride Ride Ride" are all great samples of pure melodic hard rock stuff at its best.
All in all, the new opus by Marenna and Meister is a must have for every die-hard of the golden dayz of  the melodic hard rock/AOR genre of the 80's, early 90's!!! If you love bands such as Baton Rouge, Danger Danger, Warrant and Bon Jovi, then "Out Of Reach" will make your day!
Songwritting : 8
Production : 7
Songs : 9
Musicianship : 10
Overall Rating : 8,5 / 10