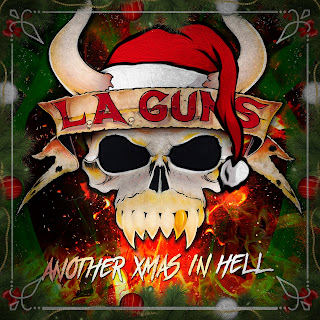 While glam hard rock heroes L.A. Guns are writing a new record that will be released late of 2020, they have just released an EP (digital only) that features covers of Xmas holiday classics by The Damned, Ramones, Slade, and Billy Squier .

"Another Xmas In Hell" also features a special guest appearance from the one and only William Shatner.

This EP features songs such as The Damned's classic "There Ain't No Sanity Clause" (which is simply killer!!!!), "Merry Christmas Everybody" (originally by Slade), "The Bills/Christmas Is The Time To Say I Love You" (feat. William Shatner / Billy Squier cover) and my personal favorite rocking tune of "Merry Christmas (I Don't Want To Fight Tonight)" (Ramones cover).

So until the new L.A. Guns, late 2020 via Frontiers Records, opus, my advice is to enjoy your holidays and crank up this hard rocking and very enjoyable Xmas EP !!!!!!