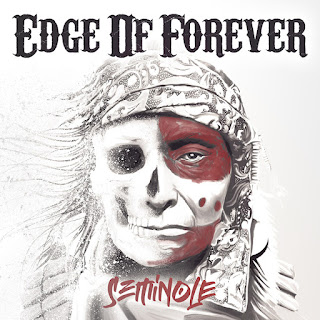 Melodic Hard Rock band of Edge Of Forever is going to release their fifth full-length record entitled "Seminole" on January 21st.  The last album saw a "rebirth" for the band with new members guitarist Aldo Lonobile (Secret Sphere, Archon Angel) and drummer Marco di Salvia (Hardline) joining with band founder and vocalist/keyboardist Alessandro Del Vecchio and bassist Nik Mazzucconi (Labyrinth).
“I didn’t wanna just write another album, another batch of songs. Being a prolific songwriter makes it easy and natural for me to sit down and write, channel the inspiration and translate that idea into music and lyrics. But Edge Of Forever is different for me. It’s my island where I don’t wanna just write songs that I sing. I want to tell stories that can inspire people to reach their goals, live for their dreams, face adversities, and win over all the odds that life throws at us" says Alessandro Del Vecchio. And conotinue by saying : “Seminole” is a conceptual album about my life, everybody’s life. I tell the story through the lenses of a Seminole warrior and how from a defeat you can still come out stronger and even more resilient, only if you want to. Sit down and enjoy how my story began, in the land of the Seminole…”
"Seminole" continues to deliver strong, passionate and powerful melodic hard rock stuff with edgy guitars, soaring vocals and some killer hooks and choruses.
The first couple of songs that kicks-off the new opus, "Get Up Your Feet Again" and "On The Other Side Of Pain", are just solid samples of Edge Of Forever music. Simple, solid and classic heavy rock stuff that both must be played on a maximum volume. "Made It Through" is yet the album's highlight; more melodic with a darker vibe in it "Made It Through" is just killer!! The up-tempo "Shift The Paradigm", the fantastic power ballad of "Breath Of Life" and the heavier "Our Battle Rages On" are all superb samples out of the new record. The album reaches its peak with the ending mini-suite “Seminole”, a four part piece featuring everything distinctive element you would expect from Edge Of Forever and of course a true highlight!!
A big bravo to Alessandro Del Vecchio and his team for creating such an amazing and 'deep' record all the way. It's one of these albums that you are going to listen to again and again! And as Alessandro rightly said ....sit down and enjoy how the story began, in the land of Seminole!!!
Songwritting : 9
Production : 9
Songs : 8
Musicianship : 10
Overall Rating : 9 / 10
https://www.facebook.com/edgeofforeverbandhttps://www.instagram.com/edgeofforeverband