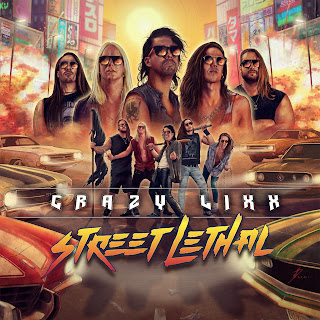 Now, this is a release which I was very anxious to listen to! The amazing band of CRAZY LIXX strikes back with its brand new opus entitled "Street Lethal". The new opus is going to be released through Frontiers Music in early November.
The big choruses are back, the up-tempo and the up-beat rhythms are also back and, in general, the late 80's vibe is back and in-your-face!
After the short but very intense intro of "Enter The Dojo", it comes the first highlight of the new record; "Rise Above" kicks-off things here in a very impressive way! Ass-kicking with a bad attitude tune that would make Motley Crue very jealous, "Rise Above" will blow your head out! With "Anthem For America" Crazy Lixx is delivering one of its best tracks of its entire catalogue; it's a hands on the air, punchy and up-beat track that it's going to make you hungry for more!
The straight-forward rocker of "The Power" is a solid one while with "Reach Out" the band offers yet another extremely melodic and more commercial song and one of the album's personal favorites. The instrumental "Final Fury" comes as a prologue of what's coming-up next. And next we have the absolute killer tune of "Street Lethal". A song that comes directly out of the glory days of the late 80's, early 90's. A powerful, edgy and heavier hard rocker that takes no prisoners with.
The groovier "Caught Between Rock'N'Roll", the huge power ballad of "In The Middle Of Nothing" and the hard AOR-ish super catchy "One Fire-One Goal" are all three great samples out of "Street Lethal". The new opus closes with the over 7-minutes track of "Thief In The Night". This is yet another classic Crazy Lixx song and that means big choruses, tons of melodies, superb performances and this so sweet 80's vibe in it.
There's not much to add here except that Crazy Lixx with its brand new "Street Lethal" comes to prove why this band is considered a leader in its scene. It brings back the glory late 80's Hair Metal scene with style and with this bad-ass attitude that will make you scream for more! Perfect!!!
Songwritting : 10
Production : 10
Songs : 10
Musicianship : 10
Overall Rating : 10 / 10
https://www.crazylixx.com/https://www.facebook.com/crazylixxhttps://instagram.com/crazylixx