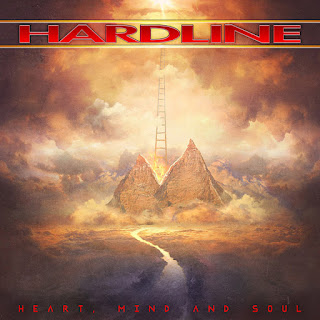 HARDLINE is back in business with their new opus entitled "Heart, Mind and Soul". The new record is going to be released through Frontiers Music this July. With the huge and classic debut "Double Eclipse"back in 1992, the band achieved to create a strong reputation around its name.
The second step came with "II" in 2002. An overall solid record that included some really crackers in it. "Leaving The End Open" was a more modern rock opus but, imho, another strong sample. The amazing "Danger Zone", 2012, saw Hardline to return to the classic hard rock paths of the debut. "Human Nature" and "Life" were both good.
Nowadays, with "Heart, Mind and Soul" Hardline is releasing an album that combines perfectly the classic hard rock sound of the debut along with the band's newest era. Johnny Gioeli is, as always, an amazing singer. His voice is unique and along with a very talented musicians to surround him, he is delivering the goods! Mario Percudani's guitar licks are smoking and the rhythm section of Anna Portalupi (bass), Marco Di Salvia (drums) and Alessandro Del Vecchio (keys) is tight.
There are plenty of rockers here enough to make you sing-a-long and turn the volume on 10!!! "Fuel To The Fire", "Surrender", "Waiting For Your Fall", "Heartless" and the groovier "80's Moment" are pure HARDLINE and with their up-beat and powerful sound they gonna make you sing-a-long. Of course, the highlights don't stop here; check out the ultra melodious and wonderful "If I Could I Would" that is flawed to perfection and the more laid-back tunes of "We Belong" and "Heavenly" which are great too.
Overall, HARDLINE's newest opus "Heart, Mind and Soul" is a great sample of pure hard rock stuff all the way that all of its musicians put heart, mind and soul to each and every single moment of it!!!!
Songwritting :9
Production : 9
Songs : 8
Musicianship : 9
Overall Rating : 8,75 / 10