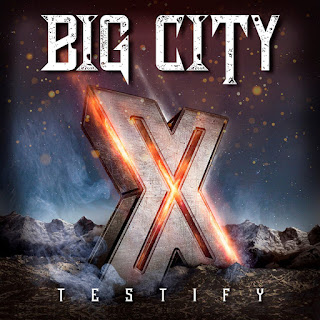 BIG CITY is an exciting melodic hard rock band with a metallic edge on its music. Hailing from Norway, Big City released its debut opus back in 2014 entitled "Wintersleep", later re-released by the Greek label Rock of Angels in 2018 as part of a deluxe edition of their second album, Big City Life.
Nowadays and under a new record label, Frontiers Music, Big City strikes back with its third record entitled "Testify X". The sound of Big City recalls to bands such as TNT, Magnus Karlsson's Free Fall and  Firewind to name a few.
"The new album will introduce our new singer. He's done an incredible job and there's more punch and heaviness in his voice. The songs are still varied, from super chill ballad to heavy and light-progressive tunes. Melodies are still in focus and there's plenty of that, as expected. It's simply the best Big City album so far!" says guitarist Daniel Olaisen.
The new album is full of highlights; from the heavier, still very melodic, "Dark Rider" & "Heart's Like A Lion" to the melodic heavy rockers of "Testify", "Running Away" and the more technical "Winds Of The Road" "TESTIFY X" offers to every melodic metal freak an almost one hour of ear pleasure!!!
BIG CITY's brand new "TESTIFY X" is one of this year's biggest surprises so far! Congratulations to Frontiers Music who signed in this very talented band! With "Testify X" Big City promises really big things in the future to come! Two thumbs up!!!
Songwritting : 9
Production : 9
Songs : 9
Musicianship : 9
Overall Rating : 9 /10
Band Contacts:https://www.facebook.com/bigcitynorwayhttps://www.instagram.com/bigcitynorway/