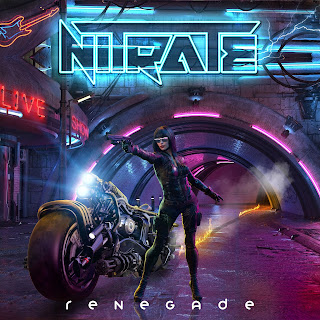 NITRATE is back in business with album number three and, in my humble opinion, their best record to-date. The new opus, "Renegade", follow on NITRATE's previous two recordings, the debut "Real World" and "Open Wide", which both received great critics from both fans and music press.
"Renegade" is going to be released through AOR Heaven this July and features 11 killer tracks for your ear pleasure! In "Renegade", the mastermind of NITRATE, Nick Hogg, changed the line-up and enlisted the amazing and very talented Alexander Strandell (Art Nation) to take over on lead vocals. Nick has, also, teamed up with Tom & James Martin (Vega) & Mikey Wilson (Kimber) to produce an album that has been heavily influenced by Def Leppard’s ‘Hysteria’.
"Renegade" kicks-off with the up-beat and edgy rocker of "Danger Zone". What an aamzingly start to kick-off this new opus; a mix of ART NATION along with some late 80's classic melodic rock sound and there you have the first highlight here. "Renegade" is a cool and very commercial tune while with "YouThink You've Got It" we have the first Def Leppard-esque track which I totally love!!! "Big City Lights" is probably one of the best songs of 2021 so far!!! Yes, I'm not overreacting here; this is simply a breathtaking track that features a huge melody, a catchy as hell chorus line and Alexander Strandell's soulful performances on front row.
The beautiful ballad of "Why Can't You Feel My Love" is a classic 80's love song while in "Addicted" the band delivers another yet classic and very Leppard-ish song that includes a sing-a-long chorus. "Alibi" is another favourite tune out of the new record. A more straight forward melodic rock gem that reminds a bit of Art Nation and H.E.A.T. and includes a fantastic chorus, again!!! I just, also, loved the more mid-tempo "Lay Down Your Arms" with its smooth and silky harmony!!!
For sure, one of this year's biggest surprises!! NITRATE with "Renegade" achieved to create a monster of a melodic rock gem that the sure thing is that will find a place in every top list at the end of the year. "Renegade" is a MUST have for the fans of the classic and commercial Def Leppard sound but, also, for the fans of bands such as H.E.A.T., Art Nation and Midnite City!!!
Songwritting : 9
Production : 9
Songs : 10
Musicianship : 10
Overall Rating : 9,5 / 10
** All songs written by Nick Hogg, Tom Martin & James Martin Except ‘Alibi’ & Children of the Lost Brigade’ Written by Nick Hogg & Rob Wylde & ‘Renegade’ written by Tom Martin, James Martin & Nick Workman
Facebook: www.facebook.com/Nitrate-100323740377514/
Spotify https://open.spotify.com/artist/6wEVMZieIv9ttCzvuDYev8
Itunes https://music.apple.com/us/artist/nitrate/1422493773