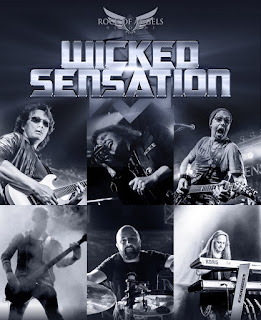 ROAR! Rock Of Angels Records is proud to announce the signing of one of the highest acclaimed Melodic Hard Rock/Metal acts, Southern Germany's WICKED SENSATION. With an almost two decades lasting band existence and four impressive albums in the bag, but also with many line-up changes over the past years, the guys around mastermind Michael Klein (also known for his involvements with Khymera, Place Vendome, First Signal) and David Reece (ex-Accept, Bangalore Choir) are now a real unit and have pressed something like the reset button ... new album, new label, new band logo, new promo forces in the back and new plans for increased live activities!
The work on the upcoming album is well advanced and the band have teamed up again with a renowned and proven master behind the mixing desks, their close friend Dennis Ward. So all signs point to success and, without a doubt and just in time for their 20th anniversary, we can clearly say: WICKED SENSATION is armed and ready for the big throw! More soon …
WICKED SENSATION is:David Reece – VocalsMichael Klein – GuitarSang Vong – GuitarMitch Zasada – BassBernd Spitzner – KeyboardsAlex Hlousek – DrumsFollow Wicked SensationWebsite: www.wicked-sensation.comFacebook: www.facebook.com/Wicked.Sensation.bandDiscography:Reflected (2001)Exceptional (2004)Crystallized (2010)Adrenaline Rush (2014)