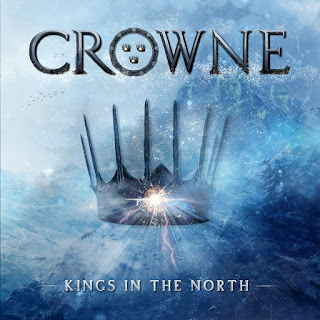 CROWNE is a new supergroup that consists of vocalist Alexander Strandell (Art Nation), guitarist/keyboardist/producer Jona Tee (H.E.A.T.), bassist John Levén (Europe), drummer Christian Lundqvist (The Poodles). The album, also, features Love Magnusson (Dynazty) providing some tasteful guitar solos.
The sound of CROWNE can be described as melodic hard rock stuff with a more updated vibe and strong emphasis on big hooks and choruses, the unique and powerful vocals of Strandell and, of course, the amazing and tight as hell rhythm section. The melodies are plenty and enough for your ear pleasure and the guitars are heavy without loosing any of their melody.
The first couple of songs that kick-off this really amazing release are "Kings Of The North" and "Perceval"; both are heavy with huge harmonic lines and those choruses enough to sing-a-long for days! Next, in "Sharoline" the band is delivering the first big anthem of this debut. A song that reminds me a bit of Art Nation's latest album that includes a catchy as hell chorus line. Simply fantastic!!
In "Unbreakable", the modern melodic hard rock gem of "Mad World" and the straight forward punchy rocker of "One In A Million" CROWNE are delivering some excellent, again, solid and ultra melodic sample of their music. Totally love every single minute, each and every single track so far!!
In "Set Me Free", we have some of The Poodles elements as well while with "Make A Stand" we are dealing with yet another killer song out of "Kings In The North". Heavier with a big bad groove in it and again with this redicoulsy catchy chorus!!!! The song that closes this breathtaking opus is entitled "Save Me From Myself" and it's a great power ballad in a way that every great record should have one. Emotional with a killer harmony and Strandell's soulful vocals in front row.
The new kings of the north have a name and that is CROWNE!!! This supergroup is here to stay and with its debut opus "Kings In The North" sets the candidate for THE ALBUM OF THE YEAR!!
Songwritting : 10
Musicianship : 10
Songs : 10
Production : 10
Overal Rating : 10 / 10