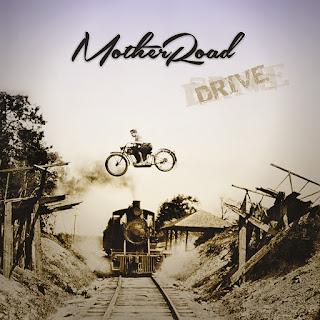 Mother Road is a band that was born from the ashes of bands such as Soul Doctor and Steelhouse Lane. Guitarist Chris Lyne joined forces with the extraordinary singer Keith Slack (Steelhouse Lane, MSG) and created a band that recalls to classic hard rock bands like Whitesnake, Deep Purple and Bad Company.
The album was originally released back in 2014 but because of its sold out it's been re-released nowadays for your ear pleasure.
The opening tune of "The Shine Will Shine Again" is absolute breathtaking; a more in a Coverdale/Page (the huge 1993 record) direction song that features Slack's superb vocal performances and a amazingly good guitar work. The fantastic hard bluesy "Drive Me Crazy" is killer while in "These Shoes" we have a classic early Whitesnake-esque tinfluenced rack with an ultra fantastic guitar work!! Really amazing stuff! Other highlights out of "Drive" are the 70's heavy rock gem of "Dangerous Highway",  "Poor Boy" and "Still Raining".
All in all, Mother Road's "Drive" opus is a really bad-ass, classic hard rock/blues album that will be apreciated by any fan of classic bands such as Deep Purple, Whitesnake, Bad Company and, of course, Coverdale/Page's self-titled mega record.
Songwritting : 8
Production : 8
Songs : 8
Musicianship : 9
Overall Rating : 8,25 / 10