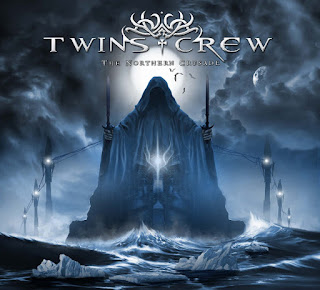 "The Northern Crusade" is entitled Twins Crew's newest opus. The band which is influenced by bands such as Helloween, Stratovarius and Iron Maiden, to name a few, attracted enthusiastic reviews for their debut release, "Judgement Night", back in 2010. Their first step was, also, voted among the best albums of that year in this particular genre by several media outlets.

"Last Crusader", the opening track, has an Iron Maiden 'air' that grabs you from the first listening and leaves you hungry for more. A fast-paced rocker with a monstrous chorus line, thundering drums and some blistering guitars!! Great stuff and, for sure, an impressive start!! "Blade" and "Unholy Grail" both are moving to the same old school Maiden, Helloween, paths while "Dr. Dream" could be the sequel of Helloween's classic tune of "Dr. Stein"!!!! Another great sample of Twins Crew sound! "Loud And Proud" has a 'commercial' vibe in it that I like it a lot and in "Under The Morning Star" is the album's first slow song. This is a very nice ballad with a brilliant guitar solo and emotional vocal performances. "Kings Of Yesterday", "Heaven Awaits" and "Take This Life" are all well-crafted up-tempo tunes with solid arrangements, powerful performances and amazing guitar work!! Finally, the track that closes the album, "Angels Fall" is the album's highlight; the variety of tempo here is givin' the extra flavor. The melody, the riff and solo, the performances...everything here is perfectly balanced.

All in all, this is a solid release! Made in an old-fashioned way and in the vain of Iron Maiden and Helloween's earlier releases, Twins Crew sound is moving in to some same paths of classic power metal sound without being boring. The strong dose of melody and the amazing guitar work here balance the final result and make this 10-track album a very enjoyable ride. Recommended!
Heavy Paradise's Rating : 8/10