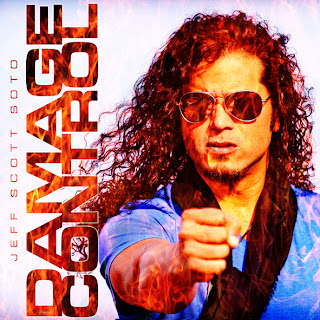 Damage Control marks the fifth official solo album by Rock veteran Jeff Scott Soto. The artist, who has more than 60 albums under his belt along with numerous collaborations and recordings around the World, has established himself as a consummate professional who manage expertly all musical genres, from Metal and Hard Rock to Funk and Disco.

His career spans nearly thirty years, beginning as the vocalist for guitar virtuoso Yngwie Malmsteen leading to frontman for many bands such as 'Talisman', the legendary 'Journey', 'Soul SirkUS' and more recently 'Trans-Siberian Orchestra'. In 1994 he released his first solo outing ‘Love Parade’, followed years later by the acclaimed 'Prism' (2002) then 'Lost In The Translation' (2005) and the rather average 'Beautiful Mess' (2009).

Soto is an extraordinary performer and amazing vocalist throughout. He blasts through the hard rocking tracks with energy and knows how to caress with a delicate ballad. For ‘Damage Control’, Jeff has adapted many of his past influences and most requested aspects of his career by blending the art of Melodic AOR with Hard Rock influences throughout. The album is completed with appearances and co-writing along with his current and former live line bandmates as well as guests such as Dave Meniketti (Y&T), Jamie Borger (Talisman/Treat), Casey Grillo (Kamelot) and Joel Hoekstra (Night Ranger).

From the start, with "Give A Little More", "Damage Control" and "Look Inside Your Heart", anyone can immediately conclude that Soto rocks hard enough and tries to turn us back to the 80's with these melodious gems ! The next tunes are just as good with the above three mentioned tracks. There are, also, some more heavy moments without, of course, loosing the major thing of this effort which is the melody! "Die A Little" is a purely commercial and catchy song that could easily be played on a daily basis on the radio. Certainly one of the highlights of the album! One of the most powerful moments of "Damage Control" is the stunning ballad "Bonafide".

Bottom line is that "Damage Control" is definitely the best album that has released  Jeff Scott Soto in the recent years. It is powerfull, melodic and above all his voice is as strong and passionate as before. I think that this album  is a must have for the fans of melodic sound!! One of the best releases for 2012 so far!
HeavyParadise's Rating : 9/10