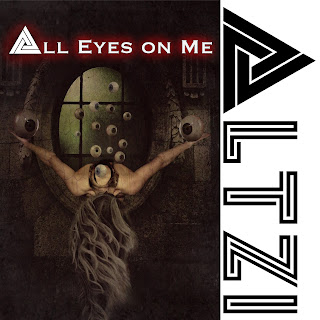 Rick Altzi is a Swedish musician who released his first album as a vocalist with AT VANCE back in 2007. Since then, he has worked with a lot of outstanding musicians from bands such as Helloween, Accept, King Diamond, Pain Of Salvation, etc..In 2020, Rick Altzi started to work on his first solo album under the moniker of ALTZI. Rick Altzi also is writing and recording with the bands Masterplan, Gathering Of Kings and Herman Frank.
In 2021, ALTZI has released a couple of successful singles and videos from the bran new album “All Eyes On Me” in advance. Rick Altzi recorded all vocals in Outhouse Studios on the west coast of Sweden, Drums were recorded at Parental Studios in Cologne. The album is mixed by Victor Ohlsson in his studio located in Gothenburg and produced by Rick Altzi and Ulrick Lönnqvist. Thomas ”Plec”Johansson took care of the mastering at The Panic Room.
The new opus kicks-off with the powwerful and up-tempo tune of "Point Of No Return". Probably one of the best tracks out of the new album! Killer stuff! The heavier "Crash And Fall", the huge AOR hymn of "Run To You" and "You Don't Believe In Love" are all three excellent samples out of this really powerful opus!! Tons of melodies, soaring vocals and edgy guitars are in front row and, of course, the choruses are enough to make you sing-a-long!! The modern and more metallic "Starngers In The Real World" is breathtaking while in "The Wind & The Rain" we are dealing with yet another stunning song!! More AOR-ish with a stelar melody in it "The Wind & The Rain" is a highlight!! The album closes with the beautiful and more laid-back tune of "Where Dreams Never Die".
ALTZI's brand new "All Eyes On Me" is without no doubt one of the most pleasant surprises of 2022 so far. Amazing melodies, solid tracks, huge hooks and choruses, powerful performances and a fantastic guitar work that will make each and every fan of the edgier melodic hard rock scene very very happy!!! All eyes on ALTZI's brand new record!!
Songwritting : 9
Musicianship : 9
Songs : 9
Production: 9
Overall Rating : 9/ 10
Guest solo guitarists: Joel Hoekstra (Whitesnake, Cher), Matthias IA Eklund (Freak kitchen), Per Nilsson (Meshuggah), Olaf Lenk (AtVance), Oliver Hartmann (Avantasia), Morgan Jensen (Swedish Erotica), Victor Ohlsson (Gathering of Kings, Saffire), Magnus Karlsson (Freefall), Andy LaRocque (King Diamond), Magnus Berglund (Arctic Rain), Stefan Lindholm (Vindictiv), Eric Rauti (Dreamland)
Facebook: https://www.facebook.com/ALTZIMUSIC Instagram: https://www.instagram.com/rickaltzi/