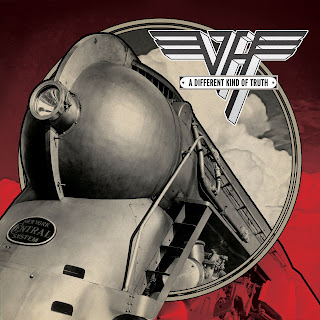 For a band like Van Halen no words are enough, I mean that with such a great career they are among the 'dinosaurs' of rock. They have released some great albums and their songs are classics among the hard rock fans. Their first chapter with David Lee Roth made them famous and gave them respectability and with Sammy Hagar, as Van Halen's lead shouter, the band took a more commercial path with a catchier sound. If you ask me,  I would say that even if I like the band's first releases a lot, I find the 'Van 'Hagar' period more interesting! I, also, think that Sammy Hagar has a better voice and with him the band put more attitude and muscle in their sound! But all these are history. The fact is that Van Halen are back after all those years with an album which is called "A Different Kind Of Truth".

During the last years, the rumors about Van Halen's comeback were plenty! And when it was official that they were going to release a new effort, I was anxious about this. So, the new album is in my hands and after  many listenings my feelings are mixed-up!! Don't get me wrong! I'm not sayin' that this is a bad record but I can't,also, sayo that this is the comeback I wished for from these guys! Most of the "A Different Kind Of Truth" songs were written in the earlier years of the band, but 'fresh' is the operative word here.

"Tattoo" is the track that opens the album. It starts great with a big shout and a classic VH riff. This is an interesting tune which features a very good guitar work but it lacks of inspiration, imo. "She's The Woman" is excellent! A nice groove, catchy chorus and an 'old' Van Halen vibe all over the song. "You And Your Blues" is one of the new compositions and it's a good track but nothin' really breathtaking. "China Town" is the first song that impressed me here. A huge guitar driven riffing and a fast-paced rocker that leaves you hungry for more!!! " Blood and Fire" is average while "Bullethead" is another furious funky-rocker and one of my favorite tracks so far. This is Van Halen!!!! "As Is" has a huge guitar work by Eddie Van Halen but in it's final result is average.  "Honeybabysweetiedoll"  it's one of these 'weird' tunes that this band has to have in each of their records. A heavy as hell guitar sound, probably the heaviest thing that I've heard from Eddie, and an overall interesting track. "The Trouble With Never" has a more commercial sound in it an "Outta Space", is another re-worked 70's track, is simply good! "Stay Frosty" is an average-bad one. "Big River" rocks good with an amazing solo from Eddie and the last track, "Beats Workin'", closes the album with an old-fashioned way!

Overall, this album didn't conviced me at all! A lack of inspiration in most of the tracks, not enough 'catchy' songs to make me want to push the repeat button, Roth's voice has nothin' to do with his earlier great performances and the 'miss' of Sammy Hagar's voice are the things that got from "A Different Kind Of Truth". The few really good songs can't save the final result. But that's only my opinion, the opinion of a big Van Halen fan.