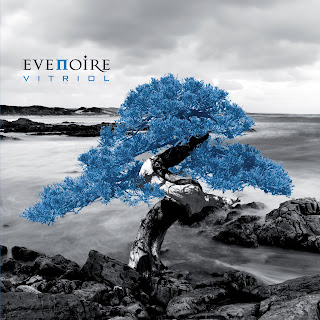 Evenoire was originaly formed in 2007 and this is their debut album which is titled "Vitriol". Evenoire sound can be described as a mix of a wide range influences such as Symphonic Metal, Gothic with some Folk pinches but, most of all, they distinguish for the amazing vocal lines of their lead vocalist Lisy Stefanoni who gives the extra something to the band's final sound.

The first thing that interested me about "Vitriol" is the small track list of the album, only eight songs, thing that especially in this kinda of music doesn't bores you at all. The album starts with the instrumental tune of "Vitriol". A dark and melacholic track that puts you right away to the album's spirit. "Days Of Blackbird" starts with an interesting heavy riff and continues with the adding of some folk elements and Stefanoni's poetic performances. A really impressive start. "Misleading Paradise" is another brilliant example of folk/symphonic metal stuff with very good arrangements and powerfull performances. Interesting! "Forever Gone" is moving in to the same paths as the previous tune but with more melodies and harmonies. The guitar work here is heavier, thing that I like the most! The "Prayer" is a short track-intro to the next one "The Girl By The Lake". This one is a more straight-forward rocker with a good riffing and Stefanoni's amazing vocal-abilities. "Minstrel Of Dolomites" is overall a good track while "Alchimia" is a bit average, imo! The last song, "Wise King", that closes this debut is one of my favorite from "Vitriol".

Overall, this is a good release from this 'newbee' band. It has some really good moments that make this album more than average. Evenoire are givin' heart and soul to this effort and that is a thing that reflects to their music. Personally, I would prefer some more melodies to the final result but let's not complain. The vocal performances by Lisy Stefanoni are over the top and the band as a 'team' is tight.