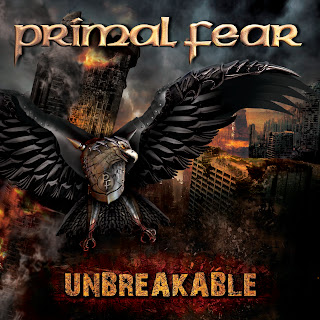 ﻿Over the last years, Primal Fear achieved to build a strong reputation over their name in the Melodic Power Metal scene. Responsible for the creation of Primal Fear in the late of 1997 were Gamma Ray's Ralf Scheepers and the bassist/singer/producer Mat Sinner.
The band, also, has released eight studio recordings and two live ones. Their last album 16.6 – Before The Devil Knows You’re Dead”, achieved to 'climb' in the position number 46 at German charts and to put the band as headliners in the ProgPower Festival in Atalanta, U.S. After a sensational tour through South America in spring 2011, more dates in Europe plus an outstanding appearance on the 2011 edition of the Wacken Open Air, the band was fired up to enter the recording studio to start tracking their ninth album “UNBREAKABLE”.
The target was crystal clear - producer & bassist Mat Sinner: “After touring for two years without breaks, the guys realized the fan favourites very well and we wrote an untamed, powerful and crushing album together”. “Unbreakable” was produced by Mat Sinner, engineered and mixed by Achim Koehler & the House Of Music studios and some more studios in Germany & Sweden between summer and autumn 2011.
So, in "Unbreakable" we are going to hear a tight as hell band with a great musicianship, a crystal clear production, some really impressive riffs and solos from two of the most talented guitar players nowadays, Alex Beyrodt and Magnus Karlsson, and some powerfull performances! Highlights are "Strike", "And There Was Silence", "Give Em Hell" and the huge power ballad "Born Again". Also, a very good moment in this album is the more proggressive tune of "Where Angels Die".
Overall, this is an extremely interesting release from one of the best today's Melodic Metal acts. Power, melodies, emotions and a huge guitar work in a solid album that you have to check it out!
HeavyParadise's Rating : 7,5/10
Track List : 1. Unbreakable (Part1), 2. Strike, 3. Give ‘Em Hell, 4. Bad Guys Wear Black, 5. And There Was Silence, 6. Metal Nation, 7. Where Angels Die, 8. Unbreakable (Part 2), 9. Marching Again, 10. Born Again, 11. Blaze Of Glory, 12. Conviction, 13. Night Of The Jumps (Bonus Track), 14. Bad Guys Wear Black (Video)