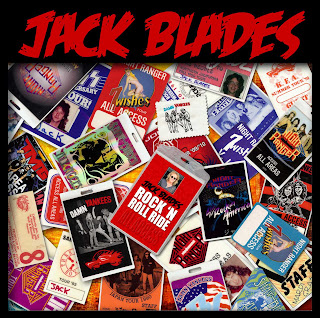 Unbelievably talented songwriter, a great bass player, dynamic producer, gifted singer but above all musician with a capital "M"! All the above are some names that make up the personality of this great artist as Jack Blades is. In his music beggining, he appeared with the legendary Night Ranger in the mid 80s and he is responsible for the 'hit' songs such as "Don't Tell Me You Love Me", "(You Can Still) Rock In America", "Sentimental Street" and "Sister Christian". Later, we find Jack Blades along with the 'giants' of the Hard Rock scene Ted Nugent, Tommy Shaw and drummer Michael Cartellone in the amazing Damn Yankees in the late '80s. With Damn Yankees released two incredibly melodic albums that are a must for every follower of the Hard Rock!!

The compositional process is, also, remarkable because it has put the 'signature' in several songs by Aerosmith, Cher, Alice Cooper, Roger Daltrey, Great White, Journey, Ozzy Osbourne, Styx, Point Of Grace and many others. In 2003, he has, also, released a solo album in collaboration with his 'buddies'  Tommy Shaw, Neal Schon, Michael Lardie (Great White), Warren De Martini (Ratt), Damon Johnson (Brother Cane), and, of course, with his colleagues in the Night Ranger Kelly Keagy and Brad Gillis. Apart from the music scene, Jack Blades took part in the Broadway musical which was titled "Rock Of Ages."

So, now we get to the new essay on this very important artist with the catchy title Rock N Roll Ride. Blades in this release works with Joel Hoekstra, Will Evankovich, Kelly Keagy, Brian Tichy, Eric Levy and Christian Matthew Cullen.  "Rock 'N Roll Ride" is a release full of melodies, powerful arrangements, passionate vocals and above all heartfull Rock N Roll stuff!!! The truth is that this album grabbed me from the first listening and I'm tryin' hard to find a weak moment or something not to my liking. From "Born for This" that is purely U.S. flavoured and uplifting, the stunning ballad "Hardest Word To Say", the great "West Hollywood", the radio "Anything For You" and my favorite "Don't Give Up" each song here has something special to offer to the listener.

Closing, I have to say that the new work of the great Jack Blades is one of the best releases so far for this scene. Strong emotions and well-written songs from a unique musician!
HeavyParadise's Rating : 8,5/10