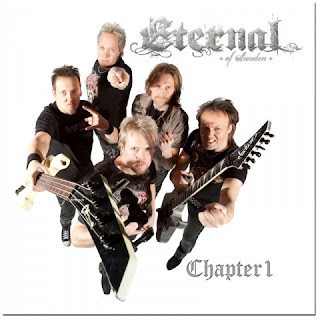 Finally, the band ETERNAL (of Sweden) has released their full-length album which is titled "Chapter I". Their debut EP, "Start Of A New Era" was a nice sample of a tight band with some very good songs.

To give you a picture of Eternal's music, I would describe it as a melodic hard/metal band in the vain of Pretty Maids, Rainbow and Y. Malmsteen but, also, they combine some newer melodic metal elements. They have, also, performed in some gigs in Sweden (Rockweekend, Rockstad:Falun and Sweden Rock). In 2012, more festival shows and gigs are waiting for these guys. "Chapter I" is released by the label HGM and distributed by Sound Polution. Peter Taegtgren is responsible for the production here at the Abyss studios.

The album starts perfectly with the "You Can't Break Us". A heavy and melodic appetaizer of what's coming up next! A tight sound, powerfull vocals and some blistering guitars in a perfect starter! "Human" is a heavier tune but has nothing to be envy about the opening song. For sure, another great track! "Virus" is a good melodic heavy track with the pedal to the metal! A good track but nothin' really breathtakin;. "Start Of A New Era" is solid and features a 'fat' guitar sound while "Scream Higher" is one of my favorite from this album. It has very good arrangements, a catchy chorus line and passionate vocal performances! Well done guys!! "Heroes" is a killer track and "Dead Or Alive" is overall good!  From the last four songs of "Chapter I" the standout tune is certenly the "Stay The Night".

Overall, this is an extremely interesting release. It includes some brilliant pieces of melodic hard/metal stuff that are played with passion. I can tell you that these guys have so much talent and I'm sure that the future looks bright for Eternal. Well done!
HeavyParadise's Rating : 8 / 10