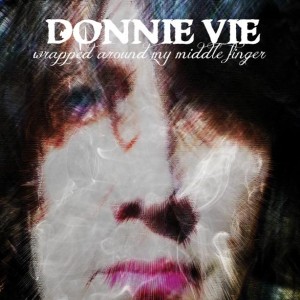 DONNIE VIE is well-known from the legendary glam-rockers Enuff Znuff which culminated at the end of the 80's, early 90's. The equilibrium between the "Beatle-esque" vocals and some more sleazier elements made him a charismatic frontman! With Enuff Znuff released some really amazing songs such as "Fly High Michelle" and "New Thing" and made the famous MTV 'playing' them on a daily basis! During these nearly 25 years of career, the Enuff Znuff released sixteen albums, toured almost the entire world and became the favorite band of the well-known Howard Stern!! So, nowadays this versatile artist is releasing his new album which is entitled "Wrapped Around My Middle Finger".

In this album, Vie is working with his old time 'friend' from Enuff ZNuff, Randi Scott on drums, Jimmy Maguire on guitars and Patrick Pulver on bass. The songs are all characterized by tight arrangements, catchy choruses, solid guitar work and above all the distinctive voice of Vie. The highlights of the new album are enough. "Lisa" is a one of the highlights here. It has a feel-good vibe and a catchy chorus that sticks in your mind from the first listening! The "Daddy's Girl" moves to a more bluesy way and "Now Ya Know" blows you away with its fantastic melody.

In conclusion, "Wrapped Around My Middle Finger" is a good album that sounds fun and gives the listener a pleasant touch of carelessness with its very good pop-rock songs. For fans of  Enuff ZNuff this is a must have, for the rest is a good chance to discover a great artist!