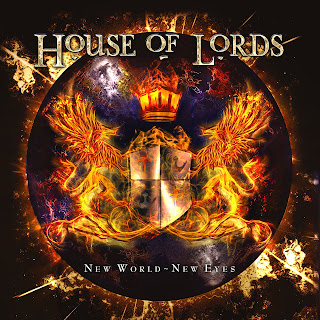 For those who are into the classic hard rock stuff or for those who love the 80's hard rock scene the name of House Of Lords is no stranger. With already nine (9) studio albums HOL is back with their 10th official effort entitled "New World-New Eyes". The new opus is going to be released through Frontiers Music this June.

For "New Wolrd- New Eyes" the band has cooperated with no other than Mark Spiro (Giant, Bad English, Cheap Trick etc.) on the songwriting of most of the songs. Spiro's signature is all over the album and that's a thing that you can feel it in each and every single moment here. Another thing that must be said here is that HOL in this new record trying to bring back the sound of their earlier works such as "Demon's Down" and "Sahara".

The first higlight of the new album comes with "New World-New Eyes". A song that sounds like it jumped out from the band's 1990 huge "Sahara" opus. The up-tempo and rocking "One More" is solid while in "The Both Of Us" HOL is delivering a really cracking tune! Up-beat & up-lifting melodic rock with attitude and with a catchy chorus line to die for!!

"Chemical Rush" is pure House Of Lords (with an updated touch...) stuff at it's best and features a bad-ass groove in it, fantastic guitar lines and it's among my favourites from the new album. In "Better Off Broken" and "$5 Bucks Of Gasoline" we have two more great samples of fistful, melodic and well-played hard rock stuff.

One of the all-time classic hard rock bands of the 80's is back with a new ass-kickin' album and the sure thing is that after all those years they still got it!