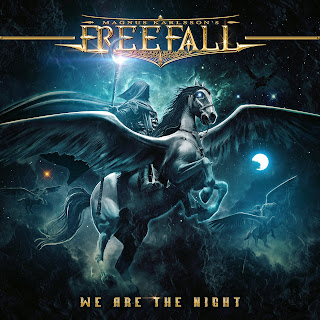 Magnus Karlsson is the mastermind behind many projects/bands over the past years. With phenomenal releases with bands such as Starbreaker (Tony Harnell), Allen/Lande or Primal Fear, to name a few, Karlsson all those years showed that he is an extremely talented and gifted musician, guitarist and songwritter; no doubt 'bout that. With his personal band Magnus Karlsson's FreeFall has released two superb samples of pure melodic hard rock/metal stuff.

Nowadays, Magnus is back in business with album number three. "We Are The Night" is entitled Magnus Karlsson's FreeFall brand new opus that is going to be released through Frontiers Music this June.

What you are going to listen to in "We Are The Night" is yet another fantastic and solid album full of amazing performances, killer tracks, tons of melodies, strong arrangements, hooks an choruses to sing-a-long and, most of all, the fantastic guitar lines from Magnus.

Standout tracks here are the ass-kickin' heavy opener tune of "Hold Your Fire" (Dino Jelusick), "Kingdom Falls" and "Dreams And Scars" which both features the brilliant vocals by the new star of Frontiers Renan Zonta, "One By One" (Romero) and the epic "Under The Black Star" (Dino Jelusick). One of my personal favourite tracks here is a song that features Magnus on lead vocals; "Don't Walk Away". A more straight forward hard rock tune that shows hat except his talent as a guitarist Magnus is an amazing vocalist too.

Bottom line is that if you loved Magnus Karlsson's previous recordings (as FreeFall...) or you are a fan of Allen/Lande (first three releases...), then you NEED this new record to your collection. A powerful, melodic, heavy and killer album that will please each and every single fan of the hard rock/metal scene in general. Highly recommended.