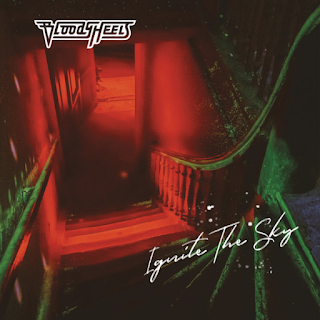 The next 'big' thing from Frontiers Music is called BLOODY HEELS and it's here with its brand new opus entitled "Ignite The Sky". The new album is going to be released through the Italian label this July.  The band's sound is somewhere between the classic late 80's U.S. Hair Metal sound (Skid Row, Sven Gali, W.A.S.P. e.t.c.) and some 'new' bands such as Santa Cruz, Kissin' Dynamite and Crashdiet.

They have a big and fat sound that features some double-kick drumming, heavy and screaming guitars and soaring vocals enough to make you play it on maximum volume!!! Formed back in 2012 in Riga, Latvia, Bloody Heels have already made a name for themselves with the EP  'Summer Nights' (2014) and the album 'Through Mystery' (2017). They’ve played in shows all around Europe including Sweden, Finland, Norway, Germany, Slovakia, Czech Republic, Poland, Netherlands, Belgium, and the Baltic States.

The first three songs that kick-off this amazingly album, "Ignite The Sky" "Criminal Masterminds" and "No Matter", are all excellent samples of BLOODY HEELS music. Heavy, powerful, in-your-face and guitar-driven hard rock stuff in a traditional way. More bad-ass groove in "Sugar And Spice" while in "Farewell To Yesterday" Bloody Heels is delivering some excellent modern and extremely melodic metal/hard rock stuff that reminded me a bit of the first three Santa Cruz efforts. F&%in' awesome! The straight forward melodic heavy hymn of "Stand Your Ground", the commercial party tune of "Thin Line" and "Streets Of Misery" are all three just PERFECT!!!!

There's nothing more to add here except that if you love late 80's Hair Metal stuff or you just love ass-kickin', up-tempo, powerful and in-your-face hard rock, then BLOODY HEELS newest opus "Ignite The Sky" is an album that you HAVE to add to your collection asap!! Simply breathtaking.....