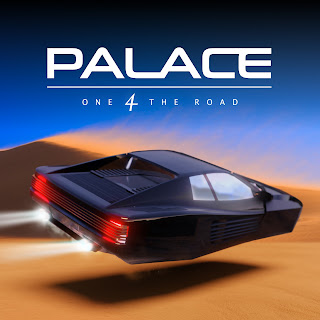 Michael Palace is an extremely talented and gifted musician; that's a fact! His collaboration with Frontiers Music, as a songwriter and guitarist, started with First Signal, which, of course, features legendary Harem Scarem vocalist Harry Hess, Cry of Dawn (featuring Goran Edman), Kryptonite (featuring The Poodles vocalist Jakob Samuel) and Pride Of Lions with vocalist Toby Hitchcock.
Nowadays, Michael is ready to unleash his brand new solo record entitled "One 4 The Road"!! The new record is going to be released through Frontiers Music this July! As in his previous recordings, the same here, Palace continues to deliver classic and pure late 80's melodic rock/AOR stuff with tons of melodies, beautiful performances and superb guitar work!
"One 4 The Road" kicks-off with the amazing starter tune of "Fifteen Minutes"! A track that brings back memories from artists such as Bryan Adams and Bon Jovi in their earlier works. A true melodic rock anthem! "Westbound" and "Too Old For This" are two more solid AOR songs that, again, Michael show to us his 80's influences. One of my personal favourite tracks out of the new album is the southern/mid-tempo and amazing tune of "The Driver"! A so emotional and beautiful track! The edgier "Facing The Music", "World Gone Mad" and "Cancel The Flight" are all three up-tempo and up-beat melodic rock gems!
I think that Michael Palace with his fourth full-length opus, "One 4 The Road", achieved to release his best, so far, album to-date! Beautiful, high-quality and a true to his roots melodic rock gem that every serious fan of this genre should add to his collection asap!
Songwritting :9
Production : 9
Songs : 9
Musicianship : 9
Overall Rating : 9 / 10
Social Media:https://www.facebook.com/palacesweden/https://www.instagram.com/mike.palace/