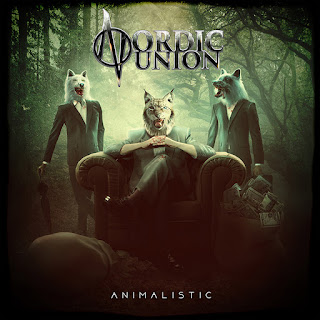 NORDIC UNION is the collaboration between the legendary vocalist Ronnie Atkins (PRETTY MAIDS) and the very talented Erik Martensson (ECLIPSE). Together they released two amazing records in the past and nowadays they are ready for album number three.
The new opus is entitled "Animalistic" and it's going to see the light of day this August via Frontiers Music.
Apart from Ronnie Atkins and Erik Martensson the line-up is completed by Fredrik Folkare on lead guitar, Henrik Eriksson on drums and Thomas Larsson on lead guitar (on "Scream", "Riot", & "Last Man Alive"). The production is handled by Erik Martensson.
The sound is a great mix of both Pretty Maids and Eclipse elements with an updated 'air' that makes the final result an extremely enjoyable music journey. Ronnie Atkins's voice is great as always and all the songs are simply amazing with strong arrangements, edgy guitars and superb melodic lines.
The first sample of the new NORDIC UNION record was the heavy and powerful tune of "In Every Waking Hour". A strong track that continues the legacy of the band's previous two recordings. "On This Day I Fight", "This Means War" and "Animalistic" are movin' to some heavier paths regarding the band's earlier records. "Scream" includes a fantastic sing-a-long chorus while in "Shot In The Dark" we are dealing with yet another ultra melodic melodic heavy tune and one of my favourites out of "Animalistic".  The new effort, of course, includes some slower moments such as "Riot" and "Last Man Alive" which are both great!!!!
Closing, I have to say that this new NORDIC UNION record, "Animalistic", is heavy, ultra melodic, bomabstic and includes only killer songs for your ear pleasure!!! The winning team of Atkins and Martensson did it again and achieved to release a gem of an album!!
Songwritting : 9
Production : 10
Songs : 9
Musicianship : 10
Overall Rating : 9,5  / 10
Produced by: Erik MartenssonMixed & Mastered by: Erik MartenssonExecutive Producer/A&R: Serafino PeruginoSocial Media:https://www.facebook.com/NordicUnionMusic