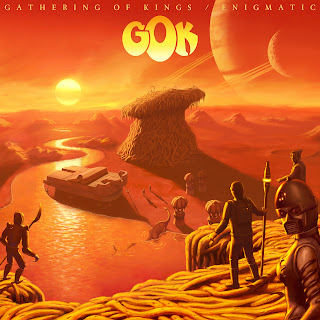 Swedish amazing melodic hard rockers Gathering Of Kings are going to release their third full-length album "Enigmatic" on July 29th via RN Records.
Gathering Of Kings are the successful project built by Ron & Nina Dahlgren, bringing together top musicians from the current hard rock scene in Sweden. The idea was to create an AOR/Melodic Hard Rock project/band like Tom Galley's Phenomena or even Tobias Sammet's Avantasia, with multiple vocalists and instrumentalists. Victor Olsson quickly became the main songwriter. After the debut album "First Mission", Ron & Nina remodelled Gathering Of Kings from being a project to becoming a band with permanent members.
The album features a guest appearance from the Swedish pop group One More Time. Its members are the singers Nanne Grönvall, one of the most beloved and popular artists in Sweden, Maria Rådsten and Peter Grönvall, the son of ABBA's Benny Andersson, on keyboards. 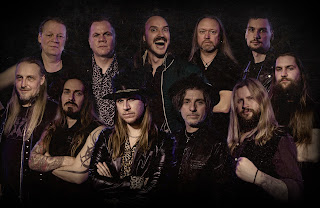 The sound of G.O.K. refers to the golden days of the mid 80's with strong emphasis on melodies, harmonic lines to die for, catchy as hell choruses and hooks, edgy guitars and big keys that the lovers of key-driven AOR will adore!!
The first highlight of the new opus comes with monster tune of "Vagabond Rise"!!! I would dare to say that this one is probably one of the best tracks of 2022 so far; simply breathtaking! The edgier "Here Be Dragons", the 'classy' "How The Mighty Have Fallen" with the late 70's elements in it and "The Prophecy" are all absolute winners out of this killer new record!
In "Feed You My Love" in which we have the participation of Pop band of ONE MORE TIME we have yet another fantastic song. The melodies, the chorus, the huge keys and, in general, everything here is in perfect balance for your ear pleasure only! The remarkable vocals of Apollo Papathansio in "Clone Trooper" make it one of my favourite songs out of "Enigmatic". Excellent work!!! The 'punchy' "Long Kiss Goodnight" in which Rick Altzi sings his heart out and the ultra melodic "New Life" are two more stunning moments!
All in all, this is simply an amazing record by Gathering Of Kings full of high-quality songs, heartful performances and top arrangements! A must have for each and every melodic rock/hard rock fan out there! A top release for 2022!
Songwritting :10
Production : 10
Songs : 10
Musicianship : 10
Overall Rating : 10 / 10
Other links: Web: www.gatheringofkings.se/ Facebook: www.facebook.com/gatheringofkingssweden instagram: instagram.com/gathering_of_kings Sales: https://www.gatheringofkings.se/#order