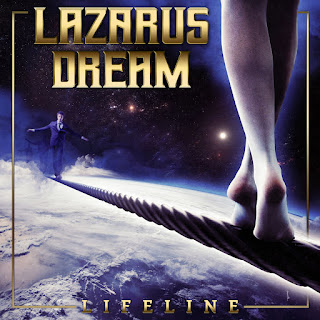 This is the second record for the Germans Lazarus Dream entitled "Lifeline". A band that is hailed by  singer Carsten "Lizard" Schulz (Domain, Evidence One, Devoid) and guitarist Markus Pfeffer.
The band influences are from the classic mid 80's, early 90's, hard 'n' heavy scene and bands such as Dokken, Queensryche, Winger and Tyketto among others. The proggy elements here and there are givin' an extra and very attractive flavour to the final result. According to the band's mastermind and charismatic multi-organist Pfeffer, the history of the band goes back to 1999, when they first formed the band with Schulz, but soon each followed their own path to 2020, where in the middle of the covid pandemic, released their debut opus entitled "Alive".
The "Alive" effort received some positive feedback from both fans and music press and nowadays the band is ready to unleash brand new music.
Some highlights out of the new record are classic melodic heavy and very rhythmic "Dont' Look Back", the Scandi metallic "Freedom", "Your Voice Inside My Head", the metallic anthem of "Crack The Hourglass", "Modern Lies" and the hard hittin' "Lonely Is The Night".
The artwork of the new record bleongs to Stan W. Decker (Blue Oyster Cult, Masterplan) and the mastering was handled by Rolf Munkes (Empire Studios). Some of the guest musicians that make their appearance on "Lifeline" are Derek Sherinian, Markus Kullman and Joris Guilbaud (Devoid / Heartline) among others.
Bottom line is that this second opus by LAZARUS DREAM includes some very good songs, strong performances and a great guitar work that will please the fans of the hard 'n' heavy genre in general.
Songwritting : 8
Production : 8
Songs: 8
Musicianship : 8
Overall Rating : 8 / 10