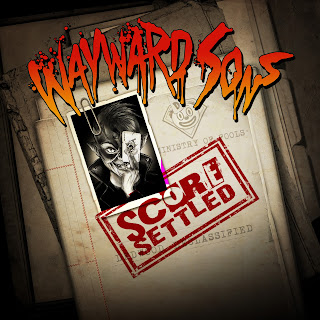 UK rockers Wayward Sonsa are releasing now a special new EP, "Score Settled". The EP follows the release of their latest studio album, "Even Up The Score" which came out in October 2021.
The new album features three new, unreleased songs that were recorded during the sessions for "Even Up The Score" as well as three tracks that were previously released only on a physical format, and a live studio version of a track previously released as a studio bonus track in Japan.
Fronted by vocalist/guitarist Toby Jepson (Little Angels), who is joined by Nic Wastell (bass), Phil Martini (drums), and Sam Wood (guitar), Wayward Sons are playing energetic an' up-beat rock 'n roll with attitude that is movin' between the 70's classic rock and the 80's hard rock scene!!!
This new EP features some really amazing, up-lifting and punchy tracks that both fans of Wayward Sons and Little Angels will adore!!!!
The ass-kickin and heavier opener "Beaten to The Punch" is solid while the up-beat and in-your-face "Can’t Take It Anymore" will remind you the glory days of Little Angels!! "Real Go-Getta", "Radio Denial" and the modern "Standby Heart" are all three solid while in "Totally Screwed" we have a killer tune!!! A fast-paced, ass-kickin' hard rock gem that I just love it!!! Play it loud!!!
Wayward Sons are a great band with killer music that formed by a true Rock 'n' Roll legend of the UK hard rock scene; Mr. Toby Jepson (Little Angels)!! Play it loud!!!
Songwritting : 9
Production : 9
Songs : 9
Musicianship : 9
Overall Rating : 9 / 10
Social Media:https://www.facebook.com/waywardsonsbanduk/ https://www.instagram.com/waywardsonsbanduk https://twitter.com/WaywardSonsBand https://www.waywardsonsband.com/site/