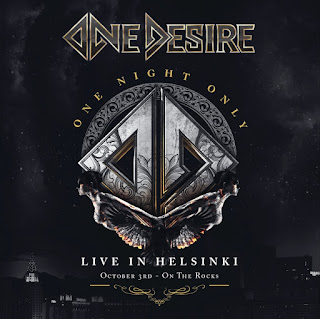 "One Night Only-Live In Helsinki" is the first ever live album of Finland's ONE DESIRE. This brand new live recording opus was captured on October 3, 2020 in Helsinki, Finland at the On The Rocks Club. With just a minimal audience, as required for live events these days, the band kicked out a selection of their most beloved and acclaimed songs. "One Night Only - Live In Helsinki" also comes with a bunch of interesting bonus content.
One Desire released their self-titled debut album to massive acclaim in 2017. With a huge hit single, 'Hurt' (nearly 3 million views on Youtube, nearly 5 million streams on Spotify) the band found their way to the forefront of the melodic rock scene.
Three years after the classic debut record, the band returned to the scene of crime with album number two entitled "Midnight Empire".
"One Night Only-Live In Helsinki" features the bands most succesful tracks from both albums. It contains songs such as "Apologize", "Heroes", "After You're Gone", "Hurt", "Only When I Breath" and "Shadowman" to name a few. The band sounds tight, the production is solid and at the end the whole album is a great sample of what's to expect from the band in their live performances.
All in all, "One Night Only-Live In Helsinki" is a great live record that captures all the magic of this really amazing and unique band!!
https://www.onedesire.net/https://www.facebook.com/OneDesireBand/https://www.instagram.com/OneDesireBand/