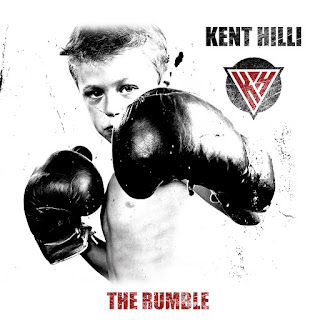 Kent Hilli is the 'golden' voice of the extraordinary melodic rock band of Perfect Plan. With his main band, Hilli released two amazing albums that both of them ended up high in every single music webzine around the world and both of them are considered already as classics!!!
Nowadays, Kent Hilli is back in business with his first ever debut opus entiled "The Rumble". The new effort is going to be released through Frontiers Music this June. Kent wrote all the songs of the album himself, except of four songs which are co-written. One song is co-written with Palace, two songs with Alessandro Del Vecchio and Pete Alpenborg, and one song is co-written with Kent's talented sister Tina.
"The Rumble" features a 'gentle' balance between rockers and ballads and the whole record is heavenly influenced by from bands such as Survivor, Foreigner, TOTO, Giant and Whitesnake.
The opening tune of "The Rumble (Never Say Die)"is simple delightful and edgy melodic rock stuff at its best. A track that reminds of, and that's very logical, Perfect Plan's works and it includes a killer chorus line. "Cold", the ultra commercial "All For Love" and the Survior-esque "I Can't Wait" are all excellent, well-crafted and in one word perfect samples of pure melodic rock stuff!!
"Don't Say It's Forever" is just breathtaking; a smooth, silk and high quality AOR gem that will make your day each time that you're gonna hear it!! In "Heaven Can't Wait" Kent is delivering a very beautiful ballad all the way. With his amazing and warm voice, he rockets this one to the sky!! The Foreigner-esque "Does It Feel Like Love", the emotional "Love Can Last Forever" and the mid-tempo tune of "Still In Love" are superb samples out of Hilli's brand new opus.
If you are a fan of the melodic rock/AOR scene, then Kent Hilli's debut opus "The Rumble" is a mandatory must have. It's one of these albums that will fill out your heart with emotions, good vibes and positive thinkings. A true gem of an album!!!
Songwritting : 10
Production : 10
Songs : 10
Musicianship : 10
Overall Rating : 10 / 10

Posted by Heavy Paradise
at Saturday, May 15, 2021 Labels: AOR, melodic rock
Email ThisBlogThis!Share to TwitterShare to FacebookShare to Pinterest