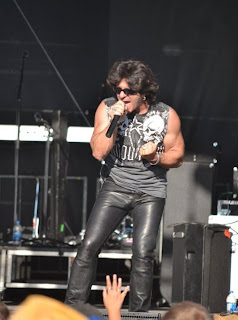 XYZ were, and still are, one of the best heavy rock bands back in the late 80's, early 90's. They had a heavier sound than most of the Hair Metal bands back then and they consisted of great musicians. Terry Ilous is no doubt a very charismatic singer! With XYZ, he released two great albums, the self-titled in 1989 and "Hungry" in 1991, but 'cause of the grunge revolution this band, like many of that era, stopped releasing new music.
They released a live cd and they came back in 2003 with "Letter To God". They, also, released a couple of records which included some unreleashed demos stuff in the middle 00's.
Nowadays, we find Terry Ilous as the lead singer of Great White but, also, with his new project which is titled Bridger. Heavy Paradise had the pleasure to interview Terry Ilous and to talk about his early days with XYZ, today's music industry , Great White and his future plans with XYZ! Enjoy....
Vassilis Chassirtzoglou
heavy paradise : Hello Terry, I would like to welcome you here in Heavy Paradise for this interview!  Firstly, let me ask you about your new work with Bridger. Is this a band or is it about a project? How did you come up with this one?
T.I. : Hi I think for the time being its only a project but you never know what can happen! I enjoyed working with Glen and JK so ....Glen called me and asked me to sing on his CD I listened to the songs liked them and asked him who would produce and write more songs for him ... he said " You Terry Ilous " so here we are today. 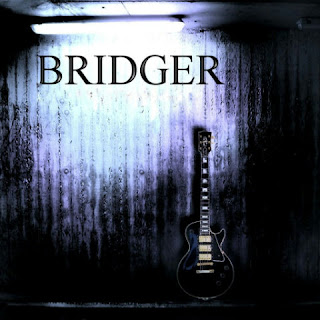 heavy paradise : I listened to the album and I really enjoyed it! Are you planning some live performances with Bridger?
T.I. : That would be so great to do those song live! Really depends on how people receive the cd.If they like it , well then you ll see all over ...so far so good.. so I may be at your door next week... 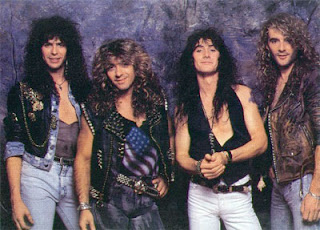 heavy paradise : XYZ is a big chapter in your career. After all those years and looking back, how do you feel that with XYZ you achieved to build such a great reputation around your name?
T.I. : XYZ is a huge part of me.I had and still have so much fun playing those songs! Plus the guys and I we are like brothers... from a different mother ahah. People like XYZ because the songs reflects and era, full of fun, sex and RnR....well lots of sex... and a lot more RnR as we are musicians first.... we love to play and sing and know how to do it.
heavy paradise : After the release of your second superb album, "Hungry", what did it go wrong and you guys didn't continue to release more music?
T.I. : Nirvana came along and a new regime was established at Capitol Records all the " Hair bands " were fired so.. they let us go too. A new era and genre of music came with Nirvana and we did not fit the style.Music became sad, girls became ugly.. and I was depressed.. so I quit the music biz for 10 years
heavy paradise : Do you think that Don Dokken was an extra 'push' to XYZ's career?
T.I. : yes he was ! he was also a burden as his stamp was a bit too strong on the first cd! Before meeting him the band has a bluesy sound and he changed that Is it good or bad? well I don t know all I can say is that we sold lots of CDS and made lots of money so... But we did loose a bit of our identity..But whos to say....
heavy paradise : XYZ always had a more harder edged sound than a lot of hair metal acts back then. Was that a result of your influences? I mean you guys must have grown up listening some heavier stuff?
T.I. : we were never a " Glam band" like poison or others.. we grew up listening to Scorpions, Motorhead, UFO Bad Co etc, and those guys were not Glam bands....and they could play their instruments.. Most Glam bands were more interested in having nice hair and lipstick then knowing how to play their instruments... 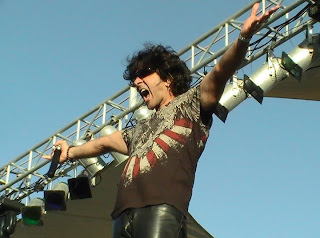 heavy paradise : What are the thing that you are missing most from those days?
T.I. : I don t miss anything from these days... i enjoyed the shows, the fast cars ,crazy women... MTV, touring the world .. booze. women, women , more women big shows , lost of money...fun fun fun... wait a minute? I MISS THOSE DAYS AHAH


heavy paradise : In 2003, XYZ were back with the "Letter To God" album. For me, it was a very good album even if it was a bit softer than your previous works. Do you think that this album was the physical step forward for the band's sound?
T.I. : Yes and know the cd should have been called Terry Ilous of XYZ but the terrible label we were on then called it XYZ, it was really my own cd as my partner Pat refused to do it so its not really and XYZ CD it s Terry Ilous of XYZ.... plus I was going through changes as i lost my son and my dad withing few month so was depressed....I happen to like that cd very much and it sold pretty well here in the States!
heavy paradise : So, the question is "are we going to expect a new XYZ release in the near future?"
T.I. : I would hope so Pat and I have been talking about it.I think its ready ... at least most of the songs are! We just need to work few things out.. 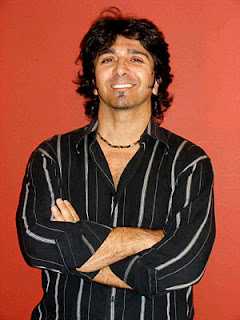 heavy paradise : Back then, there were MTV and Radio Stations, nowadays, there is Internet (Facebook-Twitter e.t.c.). Do you think that, nowadays, it is easier for a band/artist to promote its music? How do you see the situation with the illegal downloading?
T.I. : Simple the fans KILLED the music biz! they want every thing for free, free music free promo free this or that...therefor its not worth it for an artist to release a new cd as they will not be able to make any money of it

Remember we do music because we love it but would be nice to live off it! nowdays it won t happen until they find a way to stop illegal downloads.


heavy paradise : Is it difficult for a musician/band, nowadays, to get a good record deal?
T.I. : yes it is and more difficult to make a living playing music.... As i said someone has to pay for those recordings... I remember the days when I was excited about someones new cd and would be rushing to the local music store to buy it .Now days its on every free music site the next day!.... its wrong very wrong!
heavy paradise : A lot of 'old' bands such as Danger Danger, Warrant, Unruly Child, King Kobra e.t.c. are back with some great comeback albums. How do you see the whole thing with the comeback albums? Do you think that the veterans of hard rock have a lot more to offer?
T.I. : Not sure they have more to offer just believe that in todays market its easier to promote an old successful artist that has a following then a new one! So older artists keep making new cd s ! its sad as i m sure they are out there tons of great new artists... it should be both older artists and newer ones , every one should have a shot! 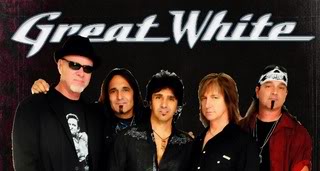 heavy paradise : You perform live with Great White. How did you come up as the lead singer of Great White? Are you going to release an album with them or the collaboration is only for the live performances?
T.I. : I have been performing with GW wince last year 2010 in August... we are doing about 60 shows a year... as far as a new CD I can t say much about it for many reasons. What I can tell you is that I enjoyed the songs and the fans...I became the singer because no one else was available ahah...just kidding... i guess my sound fits their sound... they tried many singers some much more famous then myself such as....no i won t say...just kidding.. As i said my sound fits their sound...


heavy paradise : If you had a time machine and went back, what would be the things that you have wished to change and why?
T.I. : I' d make my self taller... ahah oops you are talking about music? well I would educate my self more.The more educated you are the more power you have! I would study many more instruments and get a degree in music biz... Wait a minute that would make me a real musician? No way ! I would not change a thing.. i don t want to play for a bunch of guys... judging my playing you know the type! I want to have fun and good mixture of crazy naked chicks and cool guys that appreciate musicianship would be just fine... ...
heavy paradise : What are your future plans Terry?
T.I. : so many i can t say come back to me in 2 years and i ll tell you " well it was part of the plan "
heavy paradise : Do you want to say something to your fans?
T.I. : Yes music without fans is like morning with the sun or the rain.. its missing an element the element of life! the fans are every thing to me.... i love them very much
heavy paradise : At this point, I would like to thank you so much for this interview, Terry, and to wish you all the best!
T.I. : thank you too