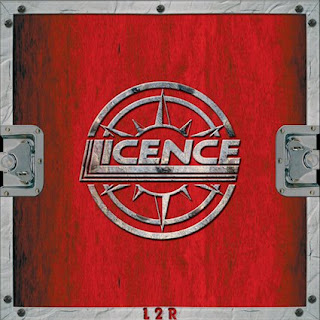 Licence is a new melodic heavy band that was founded back in 2014 by guitarist and songwriter Steam Thiess. The band, except Thiess on guitars, consists of Jacky Coke (Thiess' daughter) on vocals, Pappe on bass and Sammy Sin on drums.

The sound of Licence has its roots in the id 80's melodic metal/hard rock scene and includes heavy and sharp guitar riffs and solos, some catchy hooks n' choruses and 'classic' metal vocals (if you know what I'm saying).

"Don't Touch The Light" is a song that sounds like it 'jumped' out straight from the 80's!!! The riffs, the vocals and the attitude 'smell' like classic melodic metal from another era. It's really good. "Reflections", "L2R" and "Metal Train" are all three solid samples of a band that loves straight-forward classic metal and it's not afraid to show it!!! "Turn On The Radio" is yet another killer track with a more hard rock approach.

As I mentioned above, Licence is a new melodic metal band that loves the mid 80's scene and delivers a solid debut record that promises to rock your shocks off!!!