Frontiers Music Srl are pleased to announce the release of Primal Fear's 'The Best Of Fear' on November 10th, 2017! 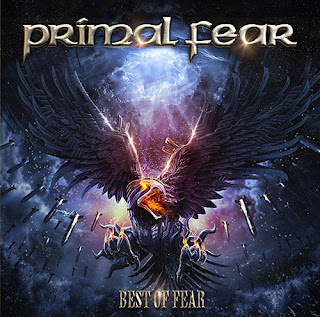 Frontiers Music Srl are pleased to announce the release of Primal Fear's 'The Best Of Fear' on November 10th, 2017!
Check out the new song, 'If Looks Could Kill' (a Heart cover) here: https://youtu.be/V-R0xgaGYGY

'Best of Fear', as the name implies, is a new best of compilation from German heavy metal masters, Primal Fear. This double album culls together the best material from Primal Fear's last 10 years of work (including the albums 'New Religion,' '16.6 (Before the Devil Knows You're Dead),' 'Unbreakable,' 'Delivering the Black,' & 'Rulebreaker'), plus four brand new songs recorded specifically for this release.
Mat Sinner says: 'We wanted to come up with something special instead of a regular "Best-Of' album. We've recorded 4 new songs including a cover of the Heart song "If Looks Could Kill' and in my view one of the best vocal performances of Ralf Scheepers' career - crushing! We've divided the album into 2 CDs - on CD 1 the new tracks and our most favorite rockers, on CD 2 the epic stuff and the long songs including an exciting artwork by Stan Decker. This is a compilation we're proud of and much more than a collector's item!'
This comprehensive overview of Primal Fear's body of work over the past ten years is aptly split into two records which showcase the magnificence (and constantly maturing) songwriting abilities of these heavy metal lifers. The first album encompasses the heavier and more straight ahead material, while the second shows the more involved and epic side of the band's songwriting.
So, whether you're just discovering Primal Fear or you're a long-time fan, this is a really good overview of their music over the past ten years and is not to be missed!
TRACKLISTING:
CD1
1. AREA 16 (new song)
2. PREDATOR (new song)
3. IF LOOKS COULD KILL (new song)
4. THRILL OF SPEED (new song)
5. THE END IS NEAR
6. STRIKE
7. SIGN OF FEAR
8. IN METAL WE TRUST
9. WHEN DEATH COMES KNOCKING
10. SIX TIMES DEAD
11. ANGELS OF MERCY
12. UNBREAKABLE
13. RIDING THE EAGLE
14. RULEBREAKER
15. KING FOR A DAY
16. BAD GUYS WEAR BLACK
CD2
1. EVERYTIME IT RAINS (Feat. Simone Simons)
2. WE WALK WITHOUT FEAR
3. FIGHTING THE DARKNESS (long version)
4. HANDS OF TIME
5. ONE NIGHT IN DECEMBER
6. THE SKY IS BURNING
7. WHERE ANGELS DIE
8. BLACK RAIN
9. BORN WITH A BROKEN HEART (FEAT. LIV REMIX)
10. BORN AGAIN
11. THE MAN (THAT I DON'T KNOW)
BAND MEMBERS:
Ralf Scheepers – Vocals
Tom Naumann - Guitars
Alex Beyrodt – Guitars
Magnus Karlsson – Guitars & Keyboards
Francesco Jovino – Drums
Mat Sinner - Bass & Vocals
Primal Fear Links:
• Official Website: www.primalfear.de
• Facebook: www.facebook.com/PrimalFearOfficial