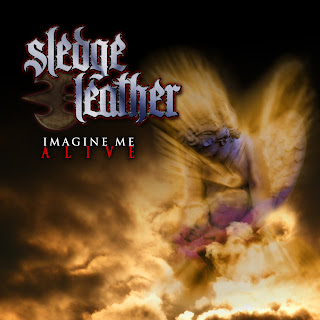 Sledge Leather is the new project from Leather Leone (Chastain, Rude Girl, Malibu Barbi) and drummer Sandy Sledge (Rude Girl, Warbride). This project was inspired in 2010 when the two musicians collaborated on the Ronnie James Dio track "Egypt" for a tribute recording.

Due to the overwhelming response for more material, Sledge Leather was born and entered the studio to record "Imagine Me Alive". The album contains eleven classic heavy in-your-face tracks and the band, also, consists of Matthias Weisheit on guitars, Jimmy Bain on bass and Scott Warren on keys! "We wanted to finish what we started with Rude Girl back in the 80's" says Sandy and Leather Leone comments: "it's great for me to finally have a huge say in what's written and how it's written. With Sledge, I feel like it's writing with a soulmate".

The album kicks off with "Imagine Me Alive". This is an 80's classic kick-ass heavy tune that features Leather Leone's smokin' vocals and Sledge's double kickin' drumming with a cool chorus line. "The Guy Upstairs Lied" is a heavier track with some aggressive in-your-face vocal performances and a track that will make every 80's classic heavy metal sound happy!! "Her Father's Daughter" is a darker tune, but still heavy enough, that contains some Metallica's influences. This is a really solid tune!!! "The Lost Forgiveness" is another solid track from the new album.

All in all, this is a classic heavy metal album in an old-fashioned way! It has the attitude and passion of the 80's, the nessecery screams, a double ass-kickin' drumming, loud guitars and some tunes that will make every single fan of heavy metal sound proud!!!
HeavyParadise's Rating : 7/10