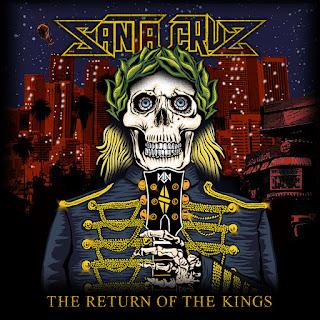 Sleaze melodic heavy rockers SANTA CRUZ are back with their brand new effort entitled "The Return Of The Kings". The new album is going to be released by M-Theory Audio this August.
Lead singer and former of Santa Cruz Archie Cruz now joined by the Los Angeles-based trio of guitarist Jerry Jade (BAD GVY), bassist Tommy Bradley (REVELRY GANG), and drummer Randy McDemian (ABRAHADABRA CLOTHING).
Santa Cruz continue to deliver powerful, in-your-face and full of attitude heavy rock stuff in the vain of bands such as Guns N Roses, L.A. Guns and Motley Crue with a more 'fresh' and updated sound that makes the final result pretty attractive for all the fans of this genre. 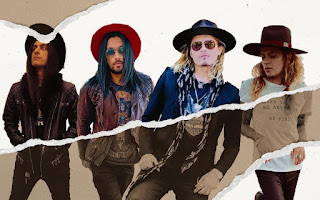 The opening tune of "Here Comes The Revolution" kicks-off things in a very 'classic' hair metal/sleaze metal way. It's heavy, up-beat and includes this late 80's Sunset Strip scene sound in all its glory. The 'nasty' and groovy "Take Me To America" is yet another cool Hair Metal gem out of the new record. "Under The Gun" 'screams' L.A. scene from miles away while in "Shots" we have a really cool and 'punkier' tune that must be played on a maximum volume!! The rock 'n' roll track of "Gunshot" is solid and fan and brings the glory days of hard rock with style!! "1000 Cigarettes" includes a more commercial and feel-good vibe in it and it's among my personal favourites out of "The Return Of The Kings" .
A big welcome back to Santa Cruz whom with "The Return Of The Kings" mark their comeback to music business with style!! A record that includes some of the magic of the late 80's, early 90's, Hair Metal/Sleaze scene when bands such as Guns N Roses, Motley Crue and Skid Row ruled the airwaves.
Songwritting : 8
Production : 8
Songs : 8
Musicianship : 8
Overall Rating : 8 /10
www.facebook.com/santacruzband
www.instagram.com/santacruzbandofficial
www.santacruzbandofficial.bandcamp.com
www.santacruzbandofficial.com