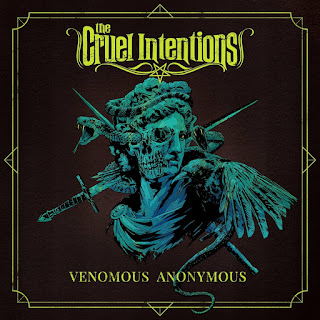 Finally, the long awaited second opus by sleaze hard rockers The Cruel Intentions is here and promises to rock your world with its classic 80's, early 90's, bad-ass attitude!! The band that has been described as “The bastard child of Guns N Roses and Hanoi Rocks” by Firework Mag, UK, delivering a really fistful, powerful and full of attitude record and the sure thing is that will attract every die hard fan of the classic Hair Metal/Sleaze era.
On the recording process The Cruel Intentions explain: “It was a long and brutal process but looking back it was a lot of fun as well. We started writing music back in late 2019 and had the first music video done by August 2020. For the Venomous Anonymous album, we recorded most of the songs in the pre-production faze and then we re-wrote, and rearranged the songs until perfection.
Mats recorded Kristian and Jimmy’s guitars and the bass at home and then Robin went to Mass Destruction Production in Sweden where he recorded drums with Erik Mårtensson. By the end of November 2021, we did all vocals and finishing touches with the help of Erik. We are really happy about the result and feel we ended up with a sound and expression we have worked towards since the very beginning.”
Erik Mårtensson (singer guitarist Eclipse, and producer at Mass Destruction Productions) mixed and mastered the album, he also functioned as both the producer and guest musician on the album, contributing with backing vocals and additional guitars.
The first big moment of the new album comes with the record's title song; "Venomous Anonymous"!! A huge and ass-kickin' classic sleaze gem that includes a bigger than life chorus, heavy guitars and attitude!!! Do you need more? Check the ultra commercial and very Sunset Strip-esque (if you know what I mean....) "Sunrise Over Sunset" and you'll get the picture!!!
"Casket Case" with its (almost) Sweet Child O’ Mine intro, the straight-forward "Final Deathroll" and the Def Leppard-ish "Bad Vibes" are all three amazing samples of a band that in the near future can be a leader in this scene!
The Cruel Intentions with their brand new "Venomous Anonymous" record comes to proove that the classic sleaze/hair metal scene is alive and kickin'!!! A damn fine album with a bad-ass attitude, loud guitars and an overall solid production that must be played on a maximum volume!!!!
Songwritting : 8
Production : 9
Songs : 8
Musicianship : 9
Overall Rating : 8,5 / 10