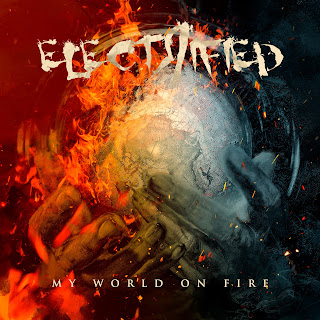 ELECTRIFIED is a Greek melodic hard rock band that was founded back in 2020 by guitarists Constantine Markou and Anthimos Manti. The perfect choice for the lead singer was found in the face of Felipe Del Valle. The line-up completed with the addition of Spiro Martinovits  on bass and Chris Siafakas on drums.
Electrified is a band that brings back the sound of the mid 80's, early 90's, with a more updated 'air' and the result is more than solid. Somewhere between Talisman, Takara and Dokken ELECTRIFIED is going to attract many fans of the classic Hard Rock era, that's damn sure! The guitars are heavy, melodic and the solos are really breathtaking and all the songs in this debut are well-composed, well-performed and the band is givin' heart and soul to each and every single moment here!
The opening tune of "Crazy Horse" is the first highlight of this debut! Heavy with a killer riff and this classic 80's vibe in it "Crazy Horse" must be played on a maximum volume!The guitar solo kicks some major asses! "Shot Through The Heart", the Dokken-esque "My World On Fire", "Running Through The Night" and "Time And Time Again" are all killer hard rock stuff and some excellent samples of how good and talented this band is!!! Another highlight out of this debut is the song "You Are Gone". The arrangements, the guitars, the performances and in general everything here is flawed to perfection!! "Prisoner Of You" and "Between The Walls" are both some cool, enjoyable and classic heavy rock cuts that will be in your daily playlist, no doubt about that! 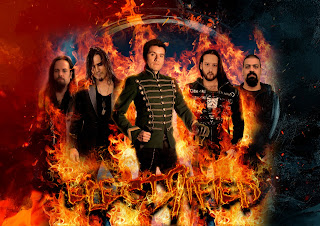 All in all, Electrified with their debut opus "My World On Fire" achive to deliver a down to earth, classic and solid hard rock record that stays true to the sound of bands such as Dokken, Lynch Mob and Talisman. Highly recommended!
Songwritting : 8
Production : 8
Songs : 8
Musicianship : 8
Overall Rating : 8 / 10
https://www.facebook.com/Electrified-band-106781595210874

Posted by Heavy Paradise
at Sunday, June 12, 2022
Email ThisBlogThis!Share to TwitterShare to FacebookShare to Pinterest