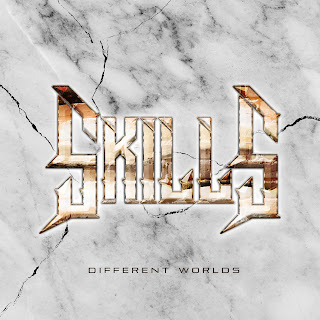 SKILLS is the brand new project of the Italian label Frontiers Music and consists of vocalist Renan Zonta (Electric Mob), guitarist Brad Gillis (Night Ranger), bassist Billy Sheehan (Mr. Big, The Winery Dogs, Sons Of Apollo), and drummer David Huff (GIANT).
The sound of Skills can be described as classic late 80's hard rock with strong emphasis on edgy guitars, the tight as hell rhythm section and Zonta's powerful vocals. Strongly influenced by the golden 80's era "Different Worlds" is a solid record that contains some excellent tunes.
I really loved the first three songs of this debut. Escape Machine, Blame It On The Night and Different Worlds are in my humble opinion great songs!! Great musicianship, excellent vocals, a big guitar sound and some powerful harmonies! For sure, a great start!
"Losing The Track" is a powerful ballad that includes a beautiful melody in it while with "Show Me The Way" the band is delivering one of the best songs out of this debut. More commercial, more AOR-ish  with this mid-80's feel-good vibe in this song is pure gold!!
From the rest of the tracks, I really enjoyed the mid-tempo "Just When I Needed You", the straight-forward rocker of "Stop The World" and "Don't Break My Heart".
This is an overall solid record that features some well-known and very very talented musicians in it!! The songs are catchy enough, the melodies are plenty, the musicianship is top-notch and the performances are really strong!
Songwritting : 8
Production : 8
Songs : 8
Musicianship : 8
Overall Rating : 8 / 10

Posted by Heavy Paradise
at Thursday, May 19, 2022 Labels: hard rock
Email ThisBlogThis!Share to TwitterShare to FacebookShare to Pinterest